What Makes a Feminist? 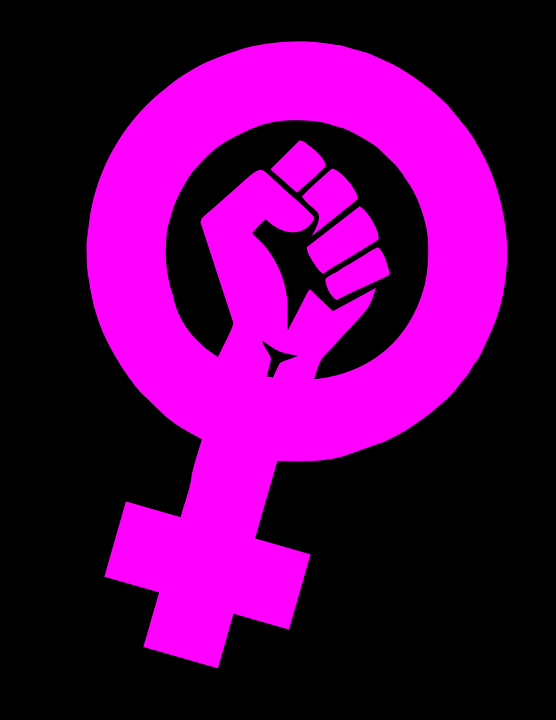 A symbol for feminism

Feminist: a word that is known as much for its empowering connotation as the controversy it tends to spark. There are many misperceptions about the movement and what it stands for. Some social conservatives perceive it as “angry” and dismiss it as a type of reverse discrimination, while many social progressives broadcast it as “empowering” and the epitome of equality.

So what is feminism? The dictionary defines it as “the theory of the political, economic, and social equality of the sexes,” a straightforward definition, but hardly comprehensive. To truly understand the purpose and intent of feminism, a bit of history follows.

Feminism as we now know it began at the Seneca Falls Convention in 1848 and continued into the early 1900s, during what is known as the “First Wave.”  Among the ranks of this movement were notable figures such as Susan B. Anthony, Sojourner Truth, and Elizabeth Blackwell.

These women fought for equal contract and property rights, legal rights, and most notably, women’s suffrage. In 1920, with the passage of the Nineteenth Amendment, feminism achieved its key objective and fell to the back of the political agenda until it was renewed several decades later.

What is colloquially known as “Second Wave” feminism began in the 1960s, focusing on workplace equality, an acceptance of female sexuality, and family and reproductive rights. This movement was often dismissed as offensive and focused on the struggles of middle-class white women. It epitomized by figures such as Betty Friedan, the author of The Feminine Mystique.

This movement continued into the 1980s, during which time the FDA approved “the Pill” (a common contraceptive), President John F. Kennedy signed the Equal Pay Act of 1963, and women were included in affirmative action programs.

In the 1990s, the “third wave of feminism” began, focusing on pay disparities, reproductive and abortion rights, and violence against women.  The third wave ended in 2012 with the ushering in of the fourth wave. The fourth wave of feminism— the one in which we are currently living— is fighting to find justice for women and calls for opposition to sexual harassment and rape culture.

This fourth wave is the most advanced yet, regarding acceptance by outside groups, but there is still much progress to be made. The struggles for gender equality will inevitably be propelled by a generation of young, progressive-minded individuals such as those that make up the Middleton High School student body. But who are these young students, and what are their perspectives on feminism?

To freshman Carly, there is no question about whether or not she considers herself a feminist. “Despite the negative connotations of the term ‘feminist,’ I just believe in equality, and that’s what feminism is.” And Carly is right. Many people do not view feminism in as positive a light as she does.

In a poll conducted by the Kaiser Family Foundation, 43% of people described feminism as “angry” (The Washington Post). In spite of these negative perceptions, Carly insists that “there are people who believe they are better than men, but they’re not feminists . . .There are people who are anti-trans and anti-sex workers, and . . . that’s not feminism. Feminism is equality.”

Carly’s argument brought up an interesting point that many others interviewed did not— the division within the movement itself. However, when pressed further about steps that could be taken to correct the misperceptions and issues of feminism, her outlook was not optimistic: “I don’t really think you can change people’s minds if they believe something.” Although it is yet to be seen whether this is true, Carly’s answer to whether or not the feminist movement is consistent with the ideal of gender equality is still an emphatic yes.

To some, there is a personal side to their support of feminism. Freshman Kaden Kasel considers himself a feminist as well. His answer as to why was focused less on his definition of what makes a feminist and more on how it has affected him and his family.

“My sister specifically gets a lot of crap because she has short hair,” Kaden said when discussing how feminism is helping change the female identity. Owing to the fact that he views feminism as a vehicle for his sister to be accepted, Kaden defines a feminist as “someone who stands up for better women’s rights.”

However, when asked how he would describe the movement of feminism as a whole, Kade admitted it was somewhat of a “tough question.” Eventually, he described it “overall as progressive, but there is a side to it that . . . can sometimes go over the top.” Carly, too, recognized this aspect of modern feminism, stating in her interview that “those people that call themselves feminists who really are not are just ruining it for the rest of us.”

Sophomore Ethan Stafford can certainly agree with that assertion. When asked if he would consider himself to be a feminist, his countenance immediately changed.

“I feel like when people think of feminists . . . they think of the most extreme end of it, [and] I don’t want to be like that.”

He admitted that much of his hesitance was due to the common misperceptions surrounding the movement.

When pressed further, however, Ethan conceded that “the name of ‘feminism’ has gotten a little skewed over the recent years . . . but I would consider myself pro women’s rights . . . just not to that extreme.”  He continued, acknowledging that feminism “is a good thing that’s been widely misconstrued.”

According to him, a feminist is “somebody who is pro-women’s rights, but also somebody who listens to the other side, and who is able to have civil discourse.  I believe that everyday people are feminists. I believe that anybody who thinks of women as equals to men or treats them as they would want to be treated is, in a way, a feminist.”

In fact, Ethan’s view of feminism is a very inclusive one. Discussing his role as a male within the feminist movement, he stated that, in his opinion, feminism “doesn’t exclude anybody.  It’s like the saying in ‘The Three Musketeers’: ‘all for one, and one for all.’ We’re all here on the same earth as one another. I believe we should all be in this together, and we should at least try to have some sanity.”

The final interviewee, Sophie Taylor, immediately and genuinely admitted to considering herself a feminist. When asked why her answer was simple: “I believe in gender equality.”

Regardless of harmful misconceptions about what feminism is, Sophie stands strong in her values. Having grown up in the aftermath of the first and second waves of feminism, Sophie was raised in a more accepting era. She affirmed this, saying that she’s always been taught that “what a feminist really is, is just someone who believes in gender equality, not someone who believes in sexism of any sort.”

A feminist is no longer defined by the stereotypical image of an angry misandrist, but by a more nuanced portrait painted by everyday people, from a freshman boy fighting for his sister’s rights to the sincere young woman who has been raised to understand the true definition of gender equality.  Although from different walks of life, each of these students is a feminist, and not one of them adheres to the harmful stereotypes that stand in feminism’s way.

Generally, the students of Middleton High School agree that feminism is an important, yet often misinterpreted, issue. However, they certainly do not represent the entire student body, and the debate surrounding feminism should not stop here. Throughout history, women and men alike have fought hard for these students to be able to have this discussion.  For now, it is up to our generation to continue to fight for our views on feminism, whatever they may be.