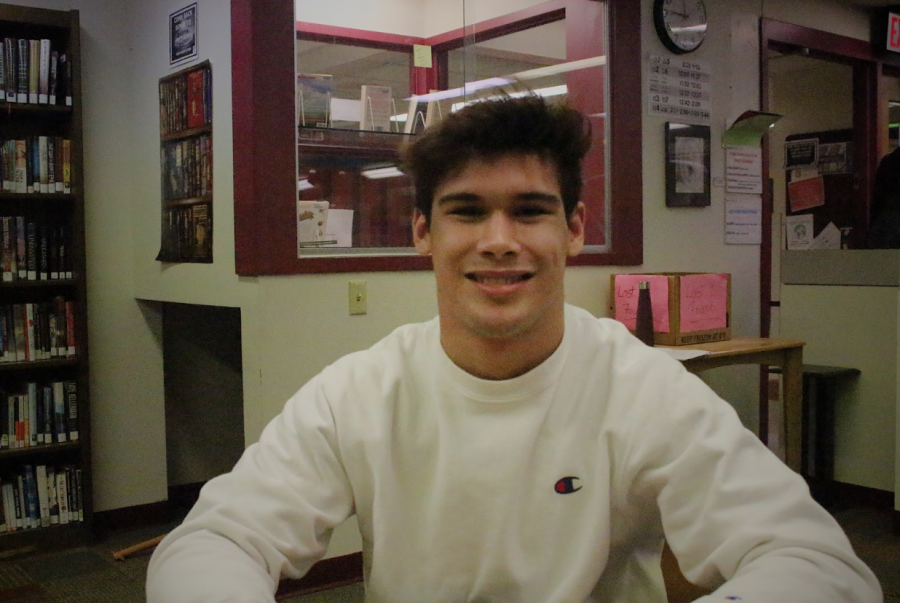 Kevin Meicher, a high school wrestling state champion, sits down for an interview in the MHS LMC.

Kevin Meicher is a senior at Middleton High School and a soon to be a full ride scholarship student at the University of Minnesota–Twin Cities for wrestling, has agreed to an interview. Meicher won the WIAA State division as a freshman for wrestling and has been a team captain for two years running. Meicher has not only had success on the wrestling mats but has been a defensive back on the varsity football team and a National Honors Society member.

How long have you been wrestling?

I have been wrestling since kindergarten.

How have the programs from when you were a child been different from the high school programs?

Was there a certain time you noticed that wrestling became more competitive?

I noticed around middle school.

Definitely. I know when I was younger, and I saw a really good guy, I just went out there and wrestled not to lose. I wouldn’t really wrestle my match. I think in high school that’s a big thing because when you know you are wrestling a guy that is better than you, you don’t really try your hardest to beat them. You don’t really feel like you are expected to beat them, so you don’t really try the hardest. The mental aspect is definitely a big one.

What is your favorite memory?

My favorite memory is probably winning state freshman year. It was at the Kohl Center, and it was in front of a bunch of people. Hopefully, I can get back there this year.

Do you find the weight groups divisive or is it just part of the sport to protect people?

Kind of both, I mean at the lighter weights the weight groups don’t really matter, but when you get bigger and bigger, it definitely matters a lot more. Since there are 14 weight classes, it ranges from 106 to 285. So obviously that is a big range, but the 14 are different. I think it’s more for kids to compete, because if you have fewer weight classes, then you have fewer kids to compete. I also think it’s for safety as well, because you don’t want to wrestle a big guy who is going to hurt you.

Do you plan to wrestle after college?

I’m not sure yet. I know college wrestling will be a part of my life, but after college, I just want to focus on a career. If wrestling takes me that path and if I see success in college, then it may be a possibility, but it’s very slim.

What do you hope for your future wrestling career?

I want to compete for a starting spot at Minnesota, and hopefully, from there, I can make it to nationals and farther.

How have coaches impacted your life?

Throughout middle school and high school, coaches have been really big for me. They teach you life lessons that you can really apply to anything. They’re pretty much like another parent because you’re with them every day of the year.

Was there a specific coach?

Coach Weiler. I have known him since I was really young and started the sport. He has really helped me have confidence in myself and just be prepared for those bigger things – in matches and in life.

What are the responsibilities of being a team captain?

For the younger kids, I am more of a leader by example. They copy what I do or follow me, so I have to be responsible for how I carry myself, and how it brushes off to others.

Are there specific ways wrestling has impacted you?

It has taught me to work hard in anything that you do, and that there are no shortcuts. Wrestling really gets the best out of you. It’s a sport that will knock you down more times than you succeed, so it’s taught me through hard work and preparation to be prepared for something as it arrives.

Do you have advice for other wrestlers?

Too much practice isn’t bad and just keep striving for your goals, because they will be met if you prepare for them.

Which high school is your greatest competitor?

How has age impacted your abilities?

In youth and in middle school age was a big factor; kids are separated into divisions by age. So sometimes I would be wrestling older kids, but then the next time I would be wrestling younger kids. But in high school, when I was a freshman, you could definitely feel the strength of the seniors. The seniors and the juniors tend to be much stronger than the freshmen and the sophomores. It’s hard as a freshman and sophomore, but if you have technique, it is different. In college, I think everyone is equal; strength and technique just come with experience.