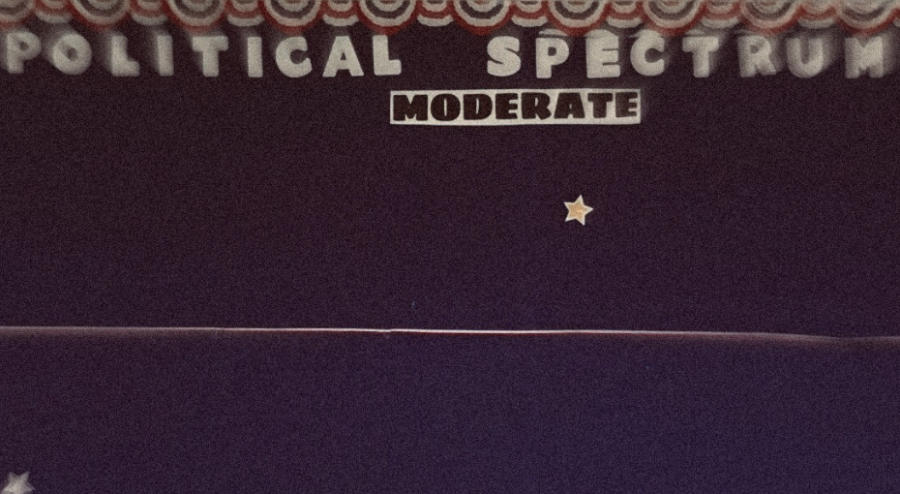 The moderate stretch of the political spectrum used by government students is completely vacant.

Over the past 20 years, we’ve witnessed a significant increase in the division of the two major American political parties. Voting ideologies of liberals and conservatives are becoming more and more extreme; meanwhile, moderate voters are disappearing. This phenomenon is called political polarization. Defined as the rift that isolates members of the Democratic and Republican parties from one another, polarization has sparked a myriad of issues that reach beyond the boundaries of political discourse. Compromised basic needs, abuse of power, and lack of camaraderie come to mind, though the list does not end there.

MHS Sophomore Annie Warriner is a politically active student at Middleton. Not only did she hold several leadership positions during her Government class last semester, but she also participates in political events outside of school. She spoke on the effects of polarization: “In society, the effects are huge. We were just in a month-long shut down because both sides refuse to work together. We now have news channels dedicated to tearing the other party apart, and fake news is everywhere, [fueling] both sides.”

Another sophomore at MHS, Faranak Hematti, was also very involved in her government class last semester. She held leadership positions and was able to see polarization sprout in our classrooms. She said that “polarization is extremely detrimental to our society because it puts ‘winning’ or beating the other party before working together and solving the issues at hand.” So while the evidence that polarization exists (and is affecting us) is hardly disputed, I had to wonder about its origins: what really caused our society to become so politically isolated? Are we polarized because of the way our government was set up, or because of the way we corrupted it to fall apart?

To answer this question, we must first consider the origins of our government. Our system relies on the vote of the people to put major representatives in power. America has divided itself into just two main political parties, the Democrats and the Republicans. What’s more detrimental is that we have a “first past the post” (FPTP) system, in which power is not divided proportionally among the parties based on the amount of their supporters. In other words, the party with the most votes gets the power. This can alienate the political minority, which in many cases still makes up nearly 50% of the voters.

Several of the Founding Fathers feared what this kind of system would bring. In his Farewell Address in 1796, George Washington said, “The common and continual mischiefs of the spirit of party are sufficient to make it the interest and duty of a wise people to discourage and restrain it.” He then served another term as President to further discourage isolation of his constituents due to party affiliation. But just 66 years later, The Civil War, a conflict that stemmed from differing party beliefs nearly divided the nation for good.

Hundreds of years of deeply seated resentment and continuous division through a two-party system could have both fueled the trends of polarization we see today. Andrew Hartman, a government teacher at MHS, corroborated this theory. He said, “I think the two-party system inherently is going to have polarization, just based on the nature of red versus blue . . . if you have more parties, you’re going to have more people feeling that their voice is being justified and that they have access to someone who represents them and their views better.” Hartman also indicated that our FPTP electoral system has flaws: “And to a large degree, I think we could even say that the way our system is set up has created this because the system is winner take all – whoever gets the most votes wins. Because of that, we’re going to have a two-party system.”

On the other side of the coin, modern habits could have also contributed to the current state of polarization. For one, our country has yet to resolve issues like gerrymandering and campaign finance. With gerrymandering, politicians can restructure voting districts, so they have the power to control the outcome of elections, essentially rigging them in their favor. This does not sit well with minority parties and allows the same people to stay in power for several terms. Campaign finance is also not regulated as much as should it be; finance for some candidates is unlimited, and there are not rules for transparency.

Megan Sipiorski, another MHS government teacher, agreed that campaign finance impacts polarization. “Whether we realize it’s affecting us or not,” she explained, “political action committees and campaign finance can skew how we see the candidates and how the elections play out.”

And we can’t forget the media; fake news, bias, and slander all contribute to polarization. We have entered another dimension of what we know the media to be. Where we may have been able to access clear-cut, factual sources 15 years ago, finding an unbiased source is not an easy task in today’s climate. Even major, prestigious networks have accumulated bias over the years, and we have gotten to the point where we don’t know whom to trust for reliable accounts of the latest news stories. False portrayals in the media have led to a lack of civil discourse in and out of political settings, and disrespect has become routine.

Perhaps as a result of this misrepresentation of political parties, many American voters have become increasingly defensive of their political ideas. Janel Anderson, a government teacher at MHS, spoke about this in the sense of identity politics, which is a fairly new concept being discussed today. This is when political “issues become so deeply ingrained in the identity of who you are that you cannot compromise without feeling like you’re compromising your personal integrity,” Anderson said. With this issue, polarization easily becomes permanent as people refuse to give up part of their identity. All of these modern issues could have contributed to the divide between political parties, especially in the past 20 years.

It seems as though either one of these scenarios is plausible; polarization could have been caused by a faulty system or our own self-destruction. To me, it seems like it is a combination of both. Mistakes were made when we crafted our democracy, but at the same time, our political abuse has also perpetuated the partisan divide. What I do know is that it is going to take a lot of work to correct polarization. Not only do we have to solve the issues we see today, but we also have to reverse the effects of century-old issues. So is that going to be possible?

Anderson says yes. She quoted Martin Luther King when she said, “‘The arc of the [moral universe] is long, but it bends towards justice.’” She holds optimistic views that we can recover from this issue. She said, “The world spins forward. We don’t spin backward. But that’s because young people keep moving us forward . . . we’re gonna get there.”

Conversely, Hartman fears that the damage is irreversible. When asked if he thought we could resolve this issue, he hesitantly said, “I mean, yeah.” He continued: “But I’m not super optimistic that it’s going to happen until we eliminate gerrymandering, [and] have meaningful campaign finance reform, which [are not popular things] to do. You’re asking the people who are advantaged by the current system to change the system to make it better for people. Why would they shoot themselves in the foot and change the system that they’re really good at winning right now? So . . . I doubt it.”

Sipiorski stood in the middle, with a hopeful, yet hesitant, view. “I like to think we will. I have a lot of faith in our future voters. I also think there’s a chance that there’s a candidate coming up that can unite us in more of a moderate message that people can get behind. I think right now, with the shutdown, we’re seeing people frustrated with this standoff which hopefully sends a message to our politicians that this isn’t what we want to see ultimately, and that we do want to see some form of compromise. So hopefully,” she concluded.

I think that all of these views have validity. As much as I like to believe that my generation has the power to resolve this issue, I know that to make a change, we have to act fast, and possibly make fundamental changes to the way our electorate works. Which, undoubtedly, will not come without challenge or pushback. What’s most important is that we take a step back to remember not what our democracy is, but what it should be. It’s not just about changing the system, but about changing the mindsets of those influenced by it, which in some ways is far more difficult. We have to realize, however, that there will come a time when it is too late to reverse these damages. We have to recognize that we have got to put in the effort. Because unless the upcoming generation of politicians and voters make a formidable effort to compromise, we will be left to face the consequences of a polarized world.