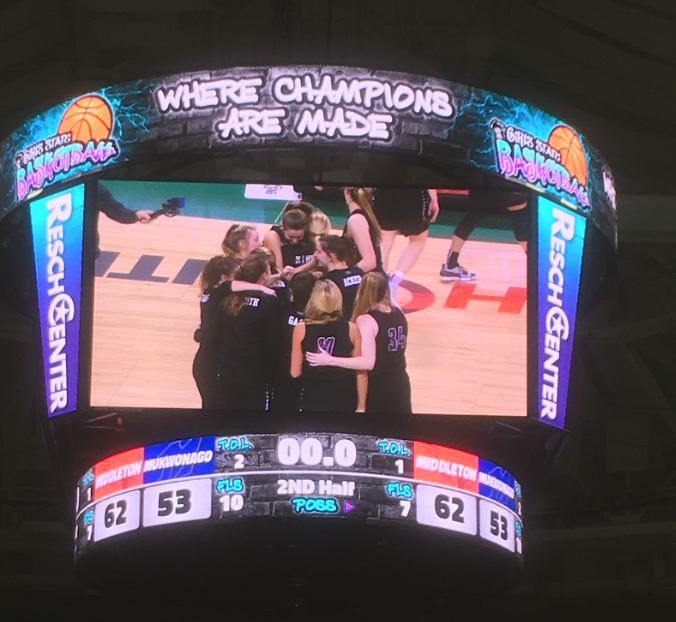 The No. 4 seed Middleton Cardinals girls basketball team upsets the No. 1 seed Mukwonago in the 2018-19 WIAA Girls Basketball State tournament. The Cardinals finished as runners-up to No. 2 seed Bay Port and will look to rebound next year as they only lose two seniors.

State Semifinals: Middleton Cardinals (22-5) vs. Mukwonago Indians (24-2)
Junior guard Megan Schwartz recalls the Cardinals’ mentality heading into the tournament, “Honestly, we were really confident. There were a lot of people that doubted us and thought that we were going to lose in the first game, and we just wanted to be the underdogs and surprise people.”

The team knocked off No. 1 seed Mukwonago by a score of 62-53. Junior guard Evie Coleman led Middleton with 19 points and 5-of-9 shooting from 3-point range. The Cardinals outrebounded Mukwonago 34-31 in large part to junior forward Sitori Tanin, who finished with 10 points and 10 rebounds.

Middleton went on a 12-3 run to close out the game following a 9-0 run by Mukwonago which had tied the game at 50. Middleton was a solid 10-14 from the free throw line during their final run. The Cardinals spread the ball well throughout the game finishing with 15 assists to Mukwonago’s 10.

State Championship: Middleton Cardinals (22-5) vs. Bay Port Pirates (26-1)
Middleton’s next game, the Division 1 State Championship, proved to be more of a challenge. This was the Cardinals’ second game against Bay Port this season, making them 0-2 against the Pirates as they lost 48-42 earlier in the year. Bay Port’s geographical relativity to the Resch Center allowed students to easily fill up the designated student section, which made it feel almost like a home game for the Pirates. As the No. 4 seed in a hostile environment, Middleton didn’t go down without a fight.

“I think we played really well, and we played together. The game could have gone either way. But it didn’t go our way,” Schwartz said.

Middleton’s junior guard Josie Lemirande hit a three from the left corner with 37 seconds left in the second half to give the Cardinals a 49-48 lead. With 6.2 seconds, Middleton forced a jump ball, which led Bay Port to retain possession. Bay Port barely staved off an upset thanks to a game-winner with four seconds left from forward Emma Nagel.

The final score ended up 50-49 in favor of Bay Port. Lemirande had a game-high 14 points, and Tanin had 13 points and led the team in rebounds with 10. Junior forward Karina Bursac also added 10 points to the Cardinals’ cause.

“Oh yeah! You’ll catch us there next year,” Schwartz believes.

Overall, it was an excellent season for the Middleton girls basketball team, who will look to build off their success for next year.