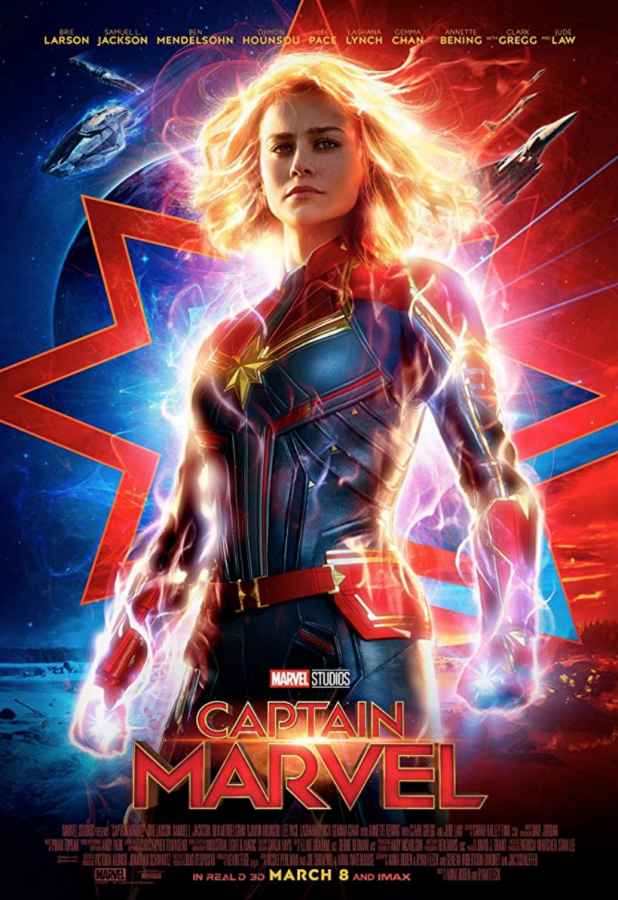 From a storytelling perspective, Captain Marvel keeps the viewer engaged at every turn.  Sitting in the theatre, I, nor any of my fellow audience members, were bored for the duration of the movie. Captain Marvel has all the elements of the traditional Marvel movie (wisecracks, Easter eggs, post-credit scenes, etc.), yet, some of these elements just don’t click. A few jokes fall flat, not all dialogue was on point, and some characterization choices didn’t make complete sense. A good example of this is when Captain Marvel, also known as Carol Danvers, is talking to Nick Fury (a secondary character) in a bar. To prove that Danvers is Captain Marvel, she shoots an energy blast from her hand and obliterates a jukebox. This scene was clearly meant to be somewhat comedic, yet I don’t think I heard a single laugh in the theatre.

Captain Marvel’s plot is somewhat unconventional. It calls back to movies like Memento, with a non-linear narrative. This technique was executed decently within the film, but I did find myself confused and frustrated at times. The viewer must piece together Carol Danvers’ backstory while she is doing the same within the movie. This results in the development of Danvers’ character in a few rushed cut scenes. I understand the filmmakers were trying to shake up the ‘traditional’ superhero origin story, but the jumping around in this movie leaves an undeveloped character that the viewer is not fully invested in.

There is a twist in the third act of the film, which is fun to watch the characters make sense of. Both the protagonists and antagonists had adequate realistic motivations, which helped engage the viewer even more. With some Marvel villains notorious for poor characterization and motives, Captain Marvel is able to stray from this stereotype. However, some of the support characters, like Yon-Rogg and Talo, still lacked depth and richness — something typical of a blockbuster like this.

I thought Carol Danvers’ character arc was quite weak. She largely remained unchanged from beginning to end. This is especially detrimental to the film because the movie is an origin story that is solely focused on developing the character of Captain Marvel, and with little character development, it falls flat. Even Nick Fury’s secondary character had a bigger arc than Carol Danvers. He was a naive agent at the beginning, but by the end, he was head of S.H.I.E.L.D., discovered that aliens exist, and concluded that Earth needs protection from larger threats. Such little character development of Danvers would have been brilliant and would’ve fit perfectly into one of the movies major themes: that a person does not need to change themselves for anyone (not even the moviegoer), except for the fact that Captain Marvel’s character does change and has a coming to terms with her powers. At the end of the movie, she must break free of her physical bonds by realizing the full potential of her power.

As a comic book reader, I thought this film underperformed compared to the standard Marvel film. There weren’t as many Easter eggs or references to the source material; but more importantly, my biggest complaint of the film is how the movie portrayed the Skrulls. In the comics, the Skrulls are nearly always evil. In a precious few cases are individual Skrulls portrayed as good, let alone a whole race of right-minded Skrulls. This made the plot twist even more confusing for me because I did not expect the Skrulls to be portrayed in the way they are. That said, I was thrilled to see the Skrulls on the big screen, but I think their potential has been ruined by making them empathetic. There are numerous brilliant comic storylines about the Skrulls (like Secret Invasion), but I think they have been squandered by this movie’s portrayal of the Skrulls. That said, Kevin Feige, the President of Marvel Studios, has said the possibility for a Secret Invasion movie still exists, but I don’t think it would be nearly as good as it could’ve been if the Skrulls were portrayed as cold-blooded killers. (NOTE: By saying the Skrulls are evil does not mean I think the Kree should be righteous. Both races have been equally cruel to the human race in the comics).

Overall, Captain Marvel is a solid addition to the grand puzzle of Marvel movies. The film does its job by being the connective tissue between Avengers: Infinity War and Avengers: Endgame. There is more to be desired, but the movie isn’t bad by nearly any means. I would recommend this movie to anyone who enjoys a good popcorn film, or likes any of the other Marvel movies; but as a stand-alone film, save your cash.