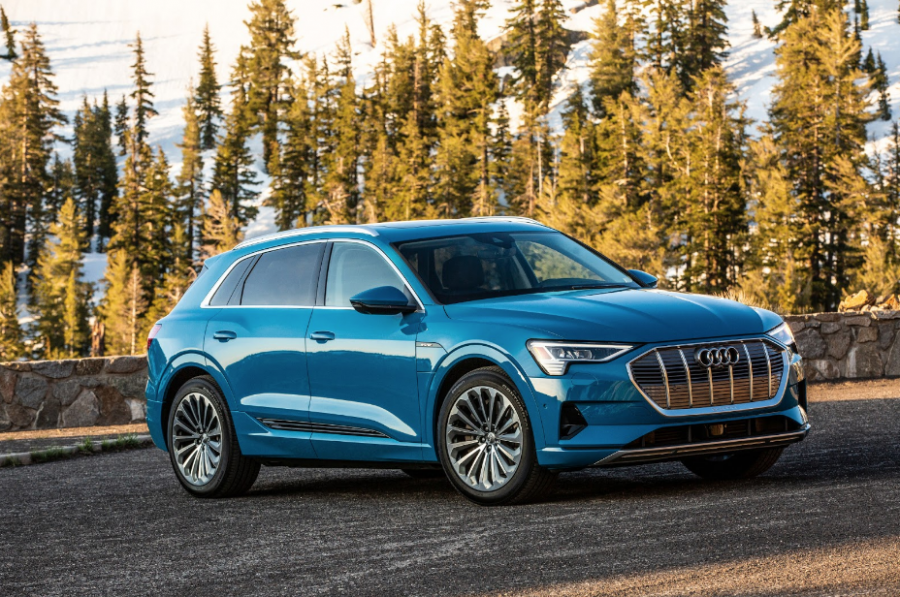 The Audi e-tron SUV is the first of Audi’s series of highly anticipated electric cars.

The 2019 Audi e-tron SUV, the first of Audi’s series of highly anticipated electric cars, looks promising, with sporty airflow features and slim, piercing lights. Sharp features and a wide grille gives it an aggressive and “mean” look, that is equally matched by the performance that reflects Audi’s attention to the “sport” in sport utility vehicle.” A new feature on an Audi, the unbroken line of the rear light is neat and futuristic. The clean-cut geometric rims make the wheels stand out and compliment the car’s medley of sharp angles and rounded silhouette. Overall, the e-tron is a great looking car, but there is more to a car than aesthetics, and the Audi does not disappoint.

The interior is no less impressive, and while from the outside it looks (and frankly is) so much smaller than the big SUVs like the Audi Q7, the space and comfort are a pleasant surprise. The fully-adjustable leather seats are comfortable and well-done, and the dash has been completely redesigned, with not a dial in sight. Every control and meter are an array of touch-screens on which the driver can view information about their car as they drive, and control functions such as radio and A/C. The gearshift for the single-speed transmission has been completely reinvented as a solid handrest curling up from the centre console with a controllable toggle rather than the lever, meaning you can shift into drive or reverse while hardly moving a muscle. Despite the five-seater’s small size, it has a genuinely impressive boot, able to fit any amount of cargo comfortably, as any true SUV should.

How does it drive? Like nothing before. When starting the car, you fully expect a rasp of ignition and a little “rev” as the engine starts, and the gentle vibration as the engine waits for your command. However, in the e-tron, the screens light up, the display flashes on, yet the car sits in utter silence. Not a single vibration nor any sound disturbs the quiet inside. It bewilders the mind that has learned to expect such feelings and sounds to suddenly be sitting in a running vehicle without any of it. With a flick of your thumb, you shift into gear and let off of the brake. You depress the throttle, and what you get is something that blows your mind. The smooth acceleration is accompanied by a whirring that makes you believe you truly are in the future. Beginning at a low pitch, the sound rises, suspending on a beautiful high note. Despite being an SUV, the acceleration provided by the electric motors’ immediate torque impresses just as much as the sound. With 402 horsepower on tap and a 0-60 mph time of only 5.5 seconds, the Audi e-tron isn’t slow. The innovative air suspension provides the smoothest ride I have ever had in any vehicle, a journey in which the loudest sound was the air-conditioning on low.

The Audi e-tron SUV is a perfect mix of head-turning looks, performance, and practicality. Air suspension, all-electric drive, and redesigned aesthetics meet a car that can do almost anything asked of it on a daily basis, all while producing zero emissions. The Audi e-tron is proof of what electric cars can achieve and offers a glimpse of the roads of the future. While it doesn’t come cheap, at around $75,000 without any optional extras, it is value for money to the core. German engineering, Audi style, and electric innovation have come together to create a car that not only represents every-day usability but goads a smile from even the most pure-blooded petrolheads, providing a simply electrifying experience.