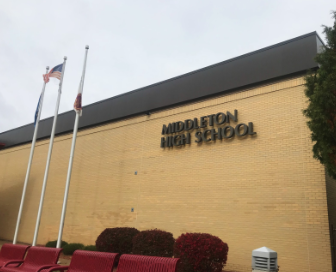 A Middleton High School employee is currently on leave after reportedly separating students by race for a standardized test.

A Middleton High School employee is currently on leave after reportedly separating students by race for a standardized test.

According to a video message from MCPASD Superintendent Dr. Dana Monogue, “One of our staff members arranged for students to take a district assessment . . . The mistake was that students were gathered together by race, segregating them from other students. This was wrong and caused harm to our students and families.”

Head of Public Relations for MCPASD Perry Hibner told local news outlet Madison365 that ninth and tenth grade students are required to participate in STAR testing, which is used to assess English and mathematical skills.

For most students, that testing occurred during Advisory earlier this week. However, on Wednesday, a separate group of students was called to the Collaborative Learning Center (CLC) to take the test during All-School Resource time. These students were formally requested for the testing on FlexiSched, meaning they were required to show up to the CLC to be marked present for that period. All requested students were people of color.

The MHS employee in question is currently on leave as the district investigates the incident, though the details of that investigation are being kept under wraps.

Students have responded to the incident, saying that this separation was a form of racial discrimination and should not be tolerated. Equity groups such as Black Student Union and Latinos Unidos met on Friday to discuss the impact of these actions. Students in the English elective class Voices of Color displayed posters in the hallway with comments reacting to the incident.

During seventh block classes on Friday, students were shown a video message from MHS Principal Peg Shoemaker regarding the incident.

“I want to deeply apologize to our students of color who have been deeply affected by this, and other incidents of hate and injustice in our school,” Shoemaker said in the video. “As a school, we have to value the humanity of every single student and staff member. School needs to be a safe place to learn.”

Administrators have responded quickly, but with little information. Monogue stressed that the investigation would be taken seriously and that the district is dedicated to creating a safe environment for every student.