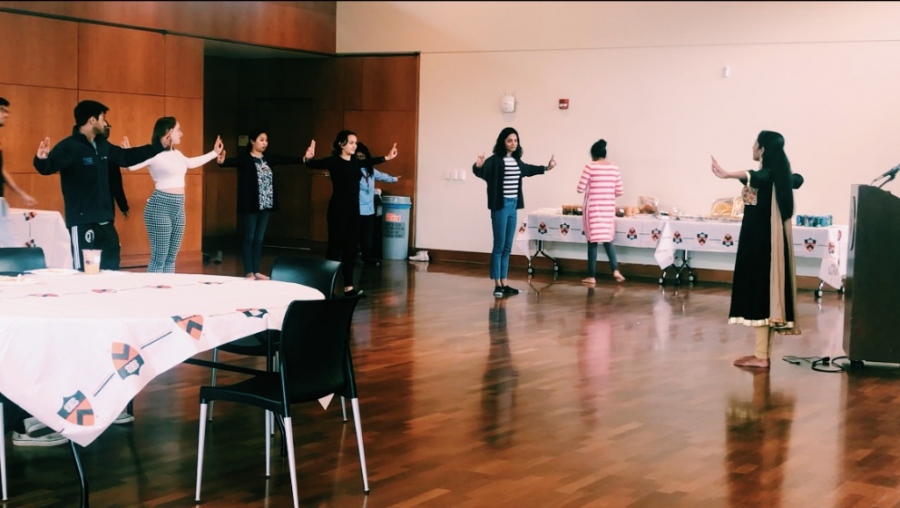 Shruti Parthasarthy, the founder and president of Calm with Kala, leads a workshop centered around the classical dance Bharatanatyam and relieving stress.

Shruti Parthasarathy, founder of Calm with Kalaa, sought out dance at an early age to manage the troubles she faced daily: “I would come home from school, I would be very sad because of microaggressions that occurred, I’d be sobbing, I’d go downstairs, I would dance, and then I would come upstairs and be totally fine.”

Parthasarathy immigrated to the United States at the age of four and says, “for a long time, I thought my identity was really dichotomous, so I would try to hide the Indian part of me. I just coupled a lot of anxiety with that.”

While Parthasarathy relied on her dance as a way to cope with the stress she faced in her life, she didn’t think much of it as a tool for others/for general application: “I ignored it for a long time. I thought, ‘it’s my passion. It’s how I’m relieving stress.’ Then I started to notice that stress is such a common human emotion. Everyone goes through it. Then I felt very grateful for the fact that I had a tool to fall back on. So I really just wanted to share my pillar of psychological strength.”

Realizing that she could help others with the stress in their lives, Parthasarathy started the Calm with Kalaa initiative. Kalaa stands for ‘art’ in Sanskrit, an ancient language that originated in India and is predominantly associated with Hindu texts, and the art form the initiative centers around is Bharatanatyam—a classical Indian dance.

Bharatanatyam originated in temples around 2,000 years ago, and according to Parthasarathy, “It was really a form to connect your religious history, and it was more so a way to connect to God. It was a really religious art form at the time.”

During the period of British imperialism in India, Bharatanatyam was largely stomped out. Regardless of the pressure applied by the British invaders, the people of India continued to practice the dance, according to Parthasarathy. According to Parthasarathy, after 1947, when the British left India, “there was a huge shift in the way Bharatanatyam was used. It became more westernized in a sense. Today, of course, I can still use it to connect to my religion and when I go back to India people still perform it in temples—I’ve still performed it in temples—but the huge shift that’s happened is that it’s viewed more as a movement of the body more so than the religious aspect. Now it’s more of performance art and a way for us to express ourselves.”

Parthasarathy now shares her love for dance in the Middleton Community. Calm with Kalaa has been integrated into MHS freshman’s Foundations of Health classes. Each session is 60 minutes long and includes the three main aspects of Bharatanatyam: footwork and acupressure, emotional regulation, and hand gestures.

In addition to her work with the Foundations of Health classes, Parthasarathy does workshops with middle schoolers to undergraduate students.

“Depending on what audience I’m teaching to—because I’ve lead workshops at middle school, high school, universities—each presentation and curriculum that I’ve put together is completely different. So that’s definitely an interesting process. More so for the younger kids, it’s more interactive, and then you have these scientific elements intertwined. When you look at undergraduate and graduate students when I teach it to them, they have more of a curiosity in how the science behind all of it works,” says Parthasarathy.

As for the initiative itself and its stress reduction goals, students in the workshops have responded well: “The most common response I got in the feedback forms that I’ve given is that they didn’t know such a tool existed. A lot of times students would write, ‘Oh my gosh this is so simple, how come I didn’t know about this before?’”

Ultimately, Parthasarathy says that obviously, dance doesn’t work for everyone, but what’s important is “finding your own medium of artistic expression. I hope to emphasize the power of art. And the power of art to ultimately reduce stress, but also to create this environment of cultural understanding.”