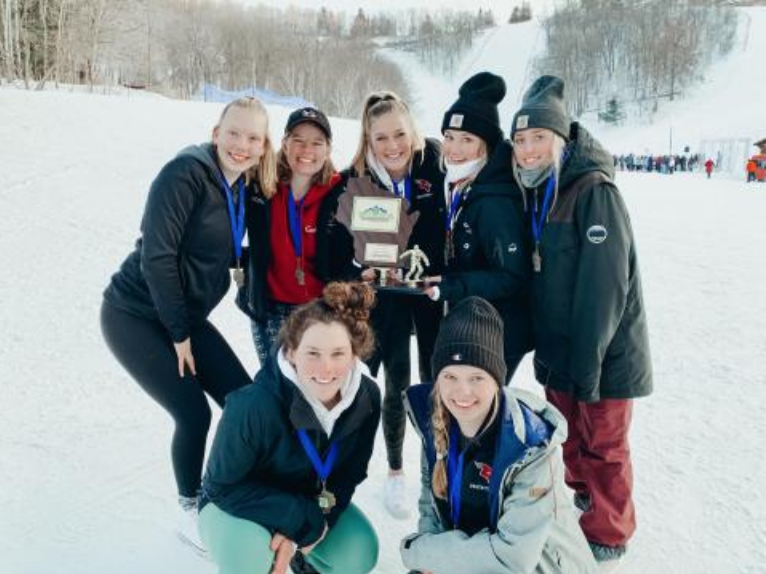 In February, the MHS girls snowboard team finished first at the WIARA State Championships with an impressive 104 points. First- time coach, Tony Ziehmke, credits the win to the team’s dedication.

“Everybody’s pretty excited to do it at all, especially for four years in a row,” says first-year coach Tony Ziehmke.

Reflecting on the WIARA win, Ziehmke credited the accomplishment to the dedication, enthusiasm, and focus of his team.

“We had very good participation in practices all year—almost 100% participation in races,” says Ziehmke. “[The team] is a really excited group that was really happy to be there all the time.”

Preparing for the WIARA Championships took more than enthusiasm, however. This year, the focus was on maximizing and fine-tuning skills.

“A lot of the things that you need to work on to improve at a high level is the same as beginning learning,” says Ziehmke, citing the practice of fundamental skills at an advanced level as another key to the state win.

Having won three state titles in the past three years, the MHS girls’ snowboarding team is more than technically skilled, but it takes dedicated practice “polishing things to a higher shine” to bring performance to the next level.

MHS Snowboarding looks to the 2021-22 season with optimism, hoping that engagement and dedication continue to drive success in years to come.