I Am Not Okay With This: Coming-of-Age Meets Sci-Fi 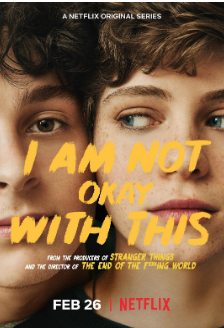 Out of its many original shows and movies, Netflix has only a few that attempt to fuse typical coming-of-age stories with supernatural events, with the wildly popular Stranger Things at the top of that list. However, I Am Not Okay With This, the latest foray into that territory, stands apart due to its honest depiction of teen friendships, sexuality, and emotions.

Based on the comic book by Charles Forsman, this show follows Sydney Novak (played by Sophia Lillis, who is mostly known as playing Beverly Marsh in the recent It movies), a high schooler who recently lost her father. She doesn’t have many friends, except for her best friend, Dinah, and generally feels out of place. Dinah, played by Sofia Bryant, is rather popular and attracts the attention of the star football player Brad (portrayed by Richard Ellis). Sydney also forms an odd friendship with the strangely loveable neighbor Stanley (Wyatt Oleff, also known for his role in the It series as Stanley Uris). As all of this is happening, Sydney is experiencing strange bursts of anger that often result in destruction and harm.

The addition of otherworldly powers gives this show a lighter tone despite their depressing effects. There’s a familiar sadness in Sydney’s coming of age story, so the inclusion of her supernatural abilities serves as both a distraction and support to her struggles. Her powers are brought on by strong emotions, like when Dinah first introduced Brad as her boyfriend. Sydney was distraught at the idea of her friend being with someone like him, and as a result, gives Brad a bloody nose without touching him. She’s broken objects in her house, killed her brother’s hedgehog, and destroyed the library at her school due to her emotional powers. It’s an interesting tactic to make Syd’s emotions so visual, but it accurately portrays how grief and depression can lead to violent bursts of feeling.

The most important aspect of this show is its LGBTQ+ representation. Without giving any spoilers, the characters in this show accurately portray the reality of human sexuality. Other movies show the evolution of one’s sexuality and attraction as a sudden realization or epiphany. In IANOWT, Sydney doesn’t follow that linear path. She never feels the need to label herself immediately, and doesn’t go through the typical self-hatred most queer people experience. When news of her interest in women goes public, none of the other students laugh or ostracize her. Allowing one’s sexuality to simply be another piece of the complex puzzle of a human seems like it should be an easy task, but most forms of media base entire characters off of their sexuality. Netflix is a somewhat progressive company and has plenty of LGBTQ+ centered content, but this rather simple action is far more radical. It’s a much-needed change in terms of representation. Individuals who don’t follow the norm of heterosexuality exist, and including them in stories is vital to acceptance. Sydney’s story is more common than you’d think, and writing a story about a girl who’s comfortable in her exploration is much-needed in our society.

While their work to represent the ambiguities of human sexualities is very needed, Netflix still needs work on their racial visibility. Sydney, Stan, Brad, and almost every other character are white. The single visible non-white person is Dinah, who is African-American. Having one token person of color does not bring justice to a white-dominated genre. Coming-of-age stories are almost always focused on white people, and Sydney acknowledges that in the opening scene: “I’m a boring 17-year-old white girl. I’m not special, is what I’m trying to say, and I’m okay with that.” Netflix recognizes that there are gaps in their content, so why aren’t they filling them? There are plenty of talented actors of color who could carry this story, such as Storm Reid or Marsai Martin. Merely pointing out the fact that your content is very white does not equal racial justice. Commenting on the issue means nothing unless actual measures are taken.

Representational issues aside, I Am Not Okay With This is a good depiction of modern American life. More people are becoming comfortable with the idea of a fluid or ambiguous approach to sexuality, and Sydney’s journey with her own identity portrays that in an approachable way. Her supernatural emotional powers, though a bit unexpected, do add another layer of complexity and dimension to her grief and general teen angst.