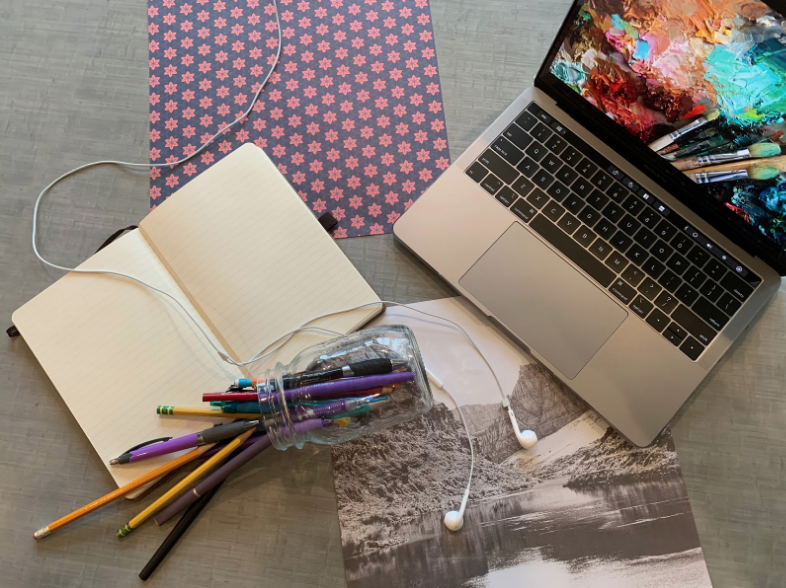 The “best week of the year” has not been canceled; instead, it’s moving online as fine arts adapt to the quarantine era.

Every April, programs fly through the hallways of Middleton High School. Free tickets are distributed in the music wing. The Performing Arts Center fills to the brim of its nearly 900-person capacity.

It’s Fine Arts Week (FAW), or as orchestra teacher and Fine Arts Week coordinator Steve Kurr calls it, “the best week of the year.” Normally, FAW gives student actors, musicians, and artists the chance to perform live for classmates and teachers. This year, as MCPASD schools close due to the coronavirus pandemic, Fine Arts Week is migrating to the digital world—and extending into a month-long celebration of the power of art.

To be an active part of the celebration, students are encouraged to record themselves performing a song, producing artwork, or engaging in another type of creative activity. They can submit their content via a link that was sent to their student emails. Kurr and the FAW team will begin releasing submissions to the public through an online platform on April 13. They will continue releasing submissions throughout April. Staff, administrators, and parents are also welcome to submit their work.

While some FAW performances, such as solo acts, will be identical to the regular FAW format, the planning team has also brainstormed a new list of categories for students to participate in. New categories to 2020 include cosplay and dress-up challenges, upcycled art submissions, quarantine-themed poetry, reading a children’s book, recreating a Hollywood movie or masterpiece on a budget, and more.

“We have possibilities. The only limit we have is we can’t be here in person. Other than that, there are no limits,” Kurr said. He hopes that the FAW team can learn from this year’s creativity and offer some of these categories in future years.

The MHS Media Department has offered to edit video submissions, which would entail adding captions, song titles, and student names, “so it becomes a little more professionally done, no matter what format a kid would turn it in,” Kurr said.

During a traditional FAW, teachers sign up their classes to attend performances in the PAC. However, because of this year’s online format, students will have the freedom to watch the FAW performances they want, when they want. “It will be asynchronous,” Kurr explained. “We’re not requiring anybody to take any part in it. They’ll get what they want out of it.”

Kurr believes students will watch and engage with the Fine Arts Week content. “I think it could challenge students to find ways to make this format engaging. And it might actually teach them how to use it better, which then might help them with their classwork,” Kurr said. “So, I don’t think there’s anything but total wins about doing this.”

Kurr also pointed out that the postponement or cancellation of spring sports, concerts, and musicals has rushed a bittersweet ending to the school year for many students, especially seniors. “All these kinds of things—we need something positive out of this,” Kurr said. “We need something that’s going to draw us back in. Something that’s going to connect us and make us happy . . . So I’m going to use my time to find ways to connect people through the arts. To me, this is exactly what we need.”

If nothing else, the challenges of moving Fine Arts Week online remind us that in some ways, online education can never compete with in-person education.

“There are some great positives, and maybe what we’re getting out of Fine Arts Week teaches us some great things, but it also reminds us that making music together can never really be duplicated in this format,” Kurr said.