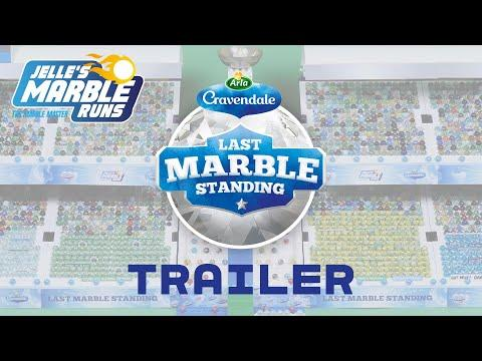 Thumbnail of the trailer.

In the absence of sports, professional marble racing is sweeping the nation. The high paced action of the most popular marble racing, “Jelle’s Marble Runs” is just what sports fans are craving in this time of quarantine.

“Jelle’s Marble Runs” are split into a selection of racing series including the “Marble League,” “Marbula One,” and “Sand Marble Rally.” The rules differ in each series, but the general rules are teams of similarly colored marbles race down marble tracks, avoiding various obstacles and trying to win a prestigious marble cup.

Before the summer Marble League sets sail, and in the wake of Jelle’s Youtube channel hitting one million subscribers, Jelle has announced a surprise tournament, named “Last Marble Standing”.  Sponsored by Arla Cravendale, six never before seen dairy-inspired teams make their debut, battling it out in six dairy-themed rounds for the coveted cup.  Not much is known about the courses at this point, but we can clearly see a funnel spin in the trailer.

Here is a breakdown of the six teams in this new tournament:

These marbles are a swirl of teal and silver/white.  They are the host of this tournament, which may have a considerable effect on their performance.  Marble racing is hard on the nerves in a normal situation, and the excitement of a debut race only adds to the energy.  Team Purity might have an edge racing on their home courses, settling in more easily.  Coached by Poncho, this team contains the marbles Pierce (Captain), Puri, Pura, Puro, and Perry.

As intimidating as these all white marbles look, the released footage suggests they may struggle to perform.  Only time will tell if their chic exteriors will pay off.  Coached by Maurice, this team contains the marbles Mike (Captain), Micky, Michael, Mikey, and Michelle.

These green and white swirled marbles appear to be an admirable foe.  They appear to be stone cold competitors in the footage, willing to do anything to win.  Coached by Slim, this team contains Skimmy (Captain), Jimmy, Timmy, Shimmy, and Shawn.

Perhaps the underdog of this tournament, this team of light blue marbles with white markings is overshadowed by the hosting blue marble team, Team Purity.  But this doesn’t mean Dairy Dash isn’t going to put up a fight.  They’re primed to win with their skill and raw talent.  Coached by 4Pint, this team contains Buttercup (Captain), Yoggy, Cheezy, M-Shakes, and Creamo.

This team has the most vibrant exterior color with a mix of green, blue, and specks of white that make them look like globes.  Coached by the infamous Dr. Fresh, this team contains Frankie (Captain), Roman, Stewart, Eli, and Henrietta.

Last but not least is this team of swirled light and dark blue marbles.  Their exteriors provide a calm and composed aurora, but we will see how they hold up on the track.  Coached by Bluebell, this team contains Dazey (Captain), Blazey, Meadow, Blaze, and Rayze.

We are all on the edge of our seats for the premiere of this tournament on Jelle’s Youtube channel on June 1st, and can’t wait to see which of these new teams will come out on top.

In other marble news, The Marble League resumes June 21.  Although it is too soon to pick favorites—the qualifying rounds are not finished yet—this year’s League is sure to be a competition to remember.