Concerts in a Pandemic 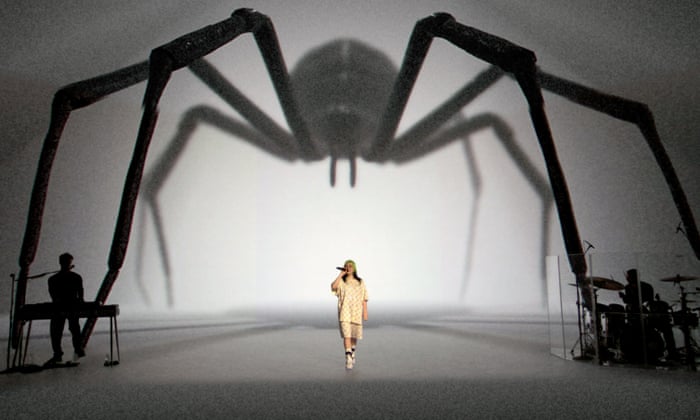 Billie Eilish live streamed a concert from a studio in L.A. with only her brother Finneas and her drummer Andrew performing with her. She used XR effects to create jaw-dropping visuals like this giant spider.

With COVID-19 cases still rising in the US and other parts of the world, the chances of having live music performances in the upcoming months are getting slimmer and slimmer. Many popular music events like Coachella have been canceled, as well as many tours for artists, like Justin Beiber, Elton John, 5 Seconds of Summer, Billie Eilish, and many more.

So how are artists continuing to perform? The answer is livestreams. Livestream concerts have become extremely popular among musical artists as a way to virtually experience live music. One artist who recently did a performance online was Billie Eilish. Eilish was filmed live from a studio stage in Los Angeles on Oct. 24. tickets sold for $30 and the performance consisted of her popular songs like “Xanny”  and “Ocean Eyes”. The show also included large animated creatures and extended reality (XR) effects.

Another artist who has been putting on online shows is Liam Payne. So far he has done 3 acts of “The LP Show”. There are several ticket bundles offered, with the lowest one being $10. His most recent show was on Oct 31 and had a Halloween theme. There have been guest appearances from musicians such as Tom Felton, as well as performances of well-known songs like “Strip That Down” and “Stack It Up,” and other popular hits from his former boyband, One Direction.

Much like Payne, James Bay put on an online concert, taking place at Shakespeare’s Globe in London. Tickets for his 13 set show cost $20, and there were also larger ticket bundles. His performance was held on October 21st, and included songs such as “You Are My Heart” and “Let it Go”.

The cancellation of hundreds of tours not only affects musicians but concert venues and tour crew as well. According to the National Independent Venue Association, 90% of independent music venues could close because of the pandemic. Tour crewmates who work year-round have been left jobless. However, one organization has been working to help with this. We Need Crew is a group that works to help raise money for tour crew who have been left behind in these troubling times. Recently, they paired up with Irish singer Niall Horan to put on a live performance at the grand Royal Albert Hall. On Nov. 7, he put on a livestreamed show for $16 a ticket with 100% of the proceeds going to We Need Crew. The show lasted 90 minutes, with over 200,000 people watching. He performed songs from his most recent album, like “Still” and “Cross Your Mind,” as well as some songs from his first album.

Many more artists have put on live stream performances, and there are others who will be performing them in the next few months. Dua Lipa, Yungblud, and Little Big Town are just a few who have upcoming shows. Although so many events have been canceled due to COVID-19, artists are still trying to connect with their fans and put on impressive, memorable performances.