Why Pro-Life? The Case on Abortion 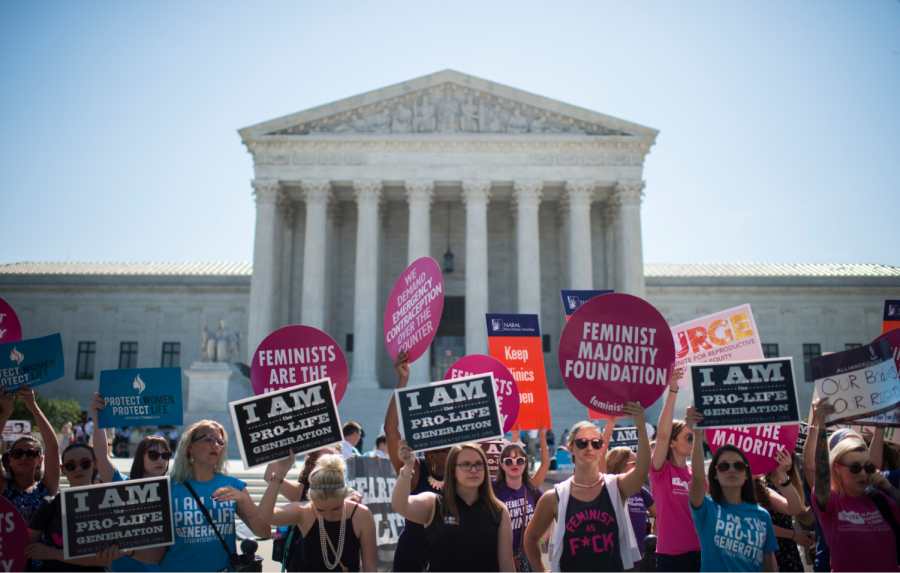 On June 20, 2016, a group of Catholics were standing outside of the Supreme Court Building, praying that the Supreme Court would overturn Roe vs Wade. Pro-choice supporters also came out to stand with the courts to keep abortion legal.

If you’ve been paying attention to the news recently, you’ve probably heard of Amy Coney Barrett, the new Supreme Court justice appointed by President Donald Trump. Barrett is known for her strong pro-life stance that caused a lot of backlash from Democrats. Even more recently, states like Ohio and Georgia have begun restricting abortion in an effort to overturn Roe v. Wade.

Roe v. Wade was introduced in 1973 when there was a 21-year-old pregnant woman named Norma McCorvey who wanted an abortion. According to Texas law, she couldn’t have an abortion because it wasn’t a case of rape or incest.  Norma went to court to challenge that law so she would be allowed to have an abortion, and her court case was coined Roe v. Wade. In the end, McCorvey won, and that decision overturned all laws that made it illegal to have an abortion.

According to the medical definition of abortion is the termination of a pregnancy.

Abortion is a partisan issue where Republicans tend to lean more pro-life while Democrats are often pro-choice.

Pro-choice Americans support a women’s right to choose what she wants to do with her body, including ending her unborn baby’s life. Meanwhile, pro-life Americans see the issue of abortion as a fight for the chance of unborn children to live and for pregnant women to use alternatives like adoption.

Abbey Woldt, a junior going to Middleton High School, sees herself as pro-choice “with a more moderate view.”

Woldt identifies as a Christian, so she is not out of touch with the pro-life movement. She personally would not want an abortion, however, she supports other people’s right to make their own decision. Woldt also connects the pro-choice movement to the women’s rights movement because pro-choice is “empowering women to choose what they want to do with their bodies.”  She also believes that Roe v. Wade specifically helped to empower women.

Melat Seyoum, a freshman going to Verona Area High School, is pro-life and “believes that every life matters.”

Seyoum also identifies as a Christian and understands the importance of seeing the other side but respectfully disagrees with them. Seyoum does not believe that the pro-life movement is about women’s rights, but it’s more about the child’s right to live. To her, a woman gets her empowerment from God. She also sees the news portraying pro-life individuals as monsters. Conception to her is the beginning of life but “regardless of when the baby gets consciousness, it was created to gain consciousness.”

Both Seyoum and Woldt believe that the topic of abortion specifically affects teenagers because teenagers are curious and exploring themselves. Seyoum even went on to say “when they have a boyfriend/girlfriend they might do things that they don’t see the end outcome of their actions.” While Woldt believes that we should be taught in sex education about abortion, Seyoum believes that teenagers should think about the baby and how it deserves to live.

I am pro-life. Many times, for the pro-choice case, people will ask “what about the women’s right to choose,” but a baby is made of two people: a biological father and a mother, so how can you say it’s only the woman’s choice when the baby isn’t only formed by the mother. Finally, it’s not about women’s rights but about the right for unborn babies to live.

Pro-choice people will say that if we make it illegal, people will still have abortions but illegally and in unsafe ways. I believe that is not a good argument, for I could say that murder should be legal because people will murder others illegally anyway, so if we make it legal, then people can murder others safely. If we make abortion illegal it will help reduce cases of abortions by making others rethink about doing them because it’s illegal and unsafe if done at all.

I must ask you this question, which is more important, the life of an unborn child or the right for the woman to end the unborn baby’s life?