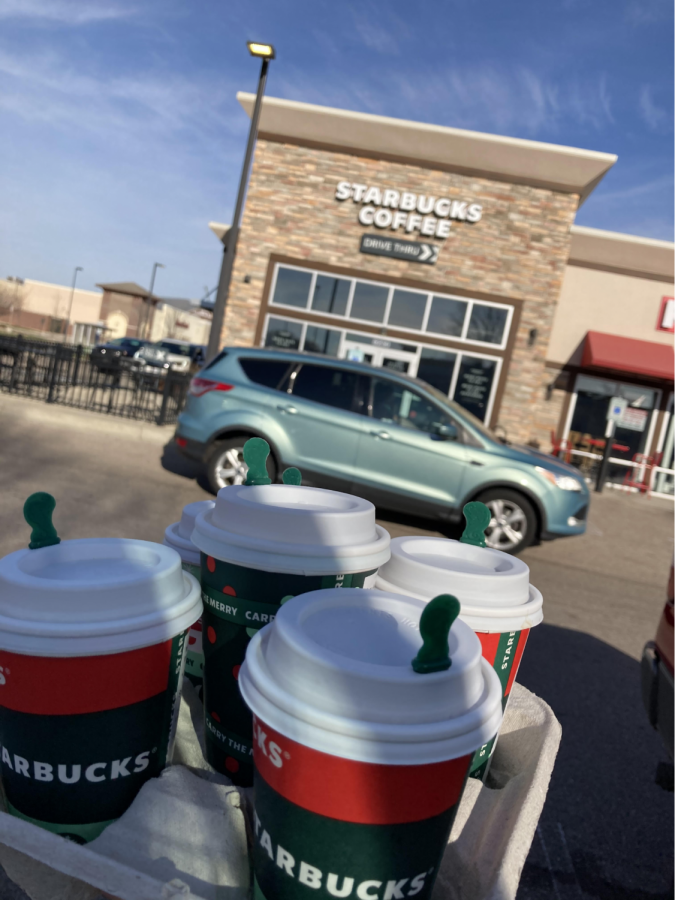 Starbucks’ holiday drinks outside of Starbucks on Greenway Boulevard as lines wrap around the building to go through the drive-thru.

On Nov. 6, with the holiday season just around the corner (if nearly two months away counts as just around the corner), Starbucks released their seasonal drinks for the holiday season. These drinks come back every year and they include the peppermint mocha, toasted white chocolate mocha, caramel brulée latte, chestnut praline latte, and eggnog latte. Although not as famous as their pumpkin spice latte, these drinks are still quite popular among Starbucks lovers, so I set out to find out whether they were worth the hype.

With the Starbucks on Allen Boulevard closed (it has since reopened), I had to go to the Starbucks near Greenway Station. I ordered ahead using their app, which was super convenient, and they had the drinks ready when I arrived. When I got to Starbucks, there were cars lined up around the building and, although the line was moving quickly, it was awesome to not have to wait.

Starbucks has always been at the top of the coffee food chain because they’re good at what they do. They have eye-catching cups, fun seasonal flavors, and delicious syrups. I came into this with high expectations, but not all of the drinks lived up to them. None of my drinks had the whipped cream and specialty toppings that they were supposed to come with, which was ultimately the biggest disappointment.

5. Eggnog Latte
Eggnog and coffee was not a match made in heaven. Only the strong flavor of nutmeg showed through from the eggnog, which clashed intensely with the strong coffee flavor of the espresso. It’s the only latte I tried that wasn’t particularly sweet, but it more than made up for that with gag-worthy amounts of nutmeg. With so many strong, competing flavors, this latte was not enjoyable to drink. The majority of the espresso and nutmeg settled closer to the bottom, so every sip was stronger and more painful than the last. I wouldn’t wish a venti size of this on my worst enemy.
4. Toasted White Chocolate Mocha
With the toasted white chocolate mocha, it was obvious that Starbucks was going for an understated holiday twist on the classic white mocha, however, the end product was, quite simply, underwhelming. I’m not completely sure what a white chocolate mocha would taste like if it was toasted, and perhaps the flavor profile was accurate but drinking it was akin to drinking a glass of warm milk with too much sugar in it in a mug that hadn’t been washed after being used for coffee. It also had a couple of chunks in it which, at best, was unsettling. In short, unless you don’t like coffee and love bland, boring drinks, this one isn’t for you.
3. Caramel Brulée Latte
In his hit play, Romeo and Juliet, Shakespeare said “A rose by any other name would smell as sweet.” Marketing teams can add fancy and enticing names to get more sales, but at the end of the day, this is nothing more than a caramel latte. To be fair, there’s nothing wrong with a caramel latte, the sweet caramel syrup mixes well with the espresso and milk, but there’s nothing special about the “caramel brulée latte”; you’ll enjoy this as much as you’d enjoy any other caramel latte.
2. Chestnut Praline
Nut lattes usually aren’t my go-to coffee order, and I actually particularly despise toffee nut lattes, however, this one was exceptional. It had the perfect balance of salty and sweet flavors. The chestnut flavors didn’t overpower the flavor of espresso, and I find that it’s nice to taste at least some undertones of coffee in lattes. This had an enjoyable, smooth flavor that was intriguing and that I couldn’t get enough of. I’ve never had a chestnut before, but after drinking this latte, I think I’d enjoy them.
1. Peppermint Mocha
Nothing tastes like the holidays quite like a peppermint mocha. This classic combination that combines the fresh minty flavor with the smooth flavor of chocolate is like eating chocolate and a candy cane at the same time. The peppermint mocha flavor almost completely obscures the flavor of espresso, but not in a bad way. Nothing tastes as holiday-esque as peppermint and chocolate, and they work so well together in a latte. I can not give high enough recommendations for the peppermint mocha; I recommend that you drop whatever you’re doing and take an impromptu visit to Starbucks to see for yourself how wonderful it is.

Reminder: Even if you’re going through a drive-thru, be respectful and wear a mask!