One Year Curly: 12 Things I Learned in 12 Months of the Curly Girl Method 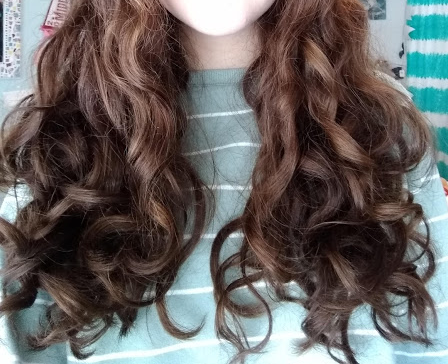 After a year of the Curly Girl Method, my hair is healthier and happier than ever before.

I always knew my hair was wavy, but not in a beach wave, model kind of way, more in a Hermione circa Sorcerer’s Stone way (yikes). It was frizzy, it was huge, and it occasionally cooperated into a few curls. I had the most beautiful ringlets as a kid, but they all seemed to disappear around the time I hit first grade. I knew my hair had potential, so I made it my New Year’s Resolution for 2020 to learn how to take care of my hair, starting by following the Curly Girl Method.

The Curly Girl Method (CGM) is a routine designed by curly hair guru Lorraine Massey in her cult-classic Curly Girl Handbook. It preaches avoiding silicones, sulfates, heat, alcohol, and a myriad of other things in order to have the curls, coils, and waves of your dreams. Since its conception in 2010, CGM has taken on a life of its own on the internet, with countless other techniques being created by its devout followers.

After an overload of CGM information and a trip to the drugstore, I was ready to start my journey that January. Here are some of the things I have learned since then:

1.CGM doesn’t have to be expensive.

With curly hair gurus swearing by brands like Innersense and Briogeo (don’t they just sound expensive?), it’s easy to believe the misconception that CGM costs a lot of money. However, many incredible products can be found at your local drugstore for under $10 — if you know where to look — which leads me to my second point…

2. Products that aren’t specifically designed for your hair can still work.

Let me explain — my hair is what I would call wavy. If you want to get into specifics, a 2B-2C on the curl chart. However, this doesn’t mean that only products that say “for wavy hair” work for me. Most, if not all, of my favorite hair products are designed for Black hair, which often has a tighter curl pattern (up in the 4’s and late 3’s on the curl chart). Most products from brands like Cantu and Shea Moisture are made for Black hair, but also work well in hair like mine.

The first few months of CGM were hard for me: I had waves, but my hair was still frizzy. What was I doing wrong? Here’s the answer — nothing. Frizz is natural for wavy and curly hair. The completely smooth, frizz-free images of curly-haired models are unrealistic. If you want the waves, you have to accept the frizz.

Results weren’t immediate for CGM, and I felt like giving up at the beginning of my curly hair journey. After doing some research, I learned that there is a transition period for everyone, and I stuck through it. After a few weeks, my hair began to cooperate.

5. Satin is a lifesaver.

One thing that does help to fight frizz is satin. Since I wash and style my hair at night, I found that the friction from my pillowcase caused a lot of frizz and flyaways. A satin pillowcase and scrunchie completely changed the game, limiting the amount of friction and frizz.

6. Refreshing is easier than you think.

In the beginning of my curly hair journey, the idea of refreshing, or styling your curls without showering, seemed overwhelming. How was I supposed to turn a frizzy mess into defined waves? Everyone seemed to have a different method, many of which didn’t seem realistic for my busy day-to-day life. In the end, I learned that a spray bottle of water and a little bit of gel go a long way. A minute or two can entirely redefine and restore those waves.

7. You know your hair best.

There is so much curly hair information on the internet, and everyone is adamant that their method is right. In the beginning, it was difficult to decide what was right for my hair. “Sure, it didn’t look as good when I was following this YouTuber’s advice, but she said it made her hair look the best, so maybe I’m doing something wrong,” I thought. After a while, I realized that I knew my hair best. I needed to listen to my hair, see what worked and what didn’t, and move from there without outside influences.

8. Results are not always consistent.

So many factors play into the results of your hair- products and their amounts/when you apply them, how dry your hair is, the humidity, the temperature… The list goes on and on. Trying to achieve the same results every time is unrealistic.

9. Styling can be simple.

Styling your hair doesn’t have to take 30 minutes, or even ten. In the beginning, I was convinced that the only way I would get results would be if I put a lot of time into my hair. I thought I had to finger-coil (wrap each section of hair around your fingers), use a Denman brush to twist my hair, or section and apply products to each area. The truth is that some of my best results came from keeping things simple. While those time-consuming techniques might be fun every once in a while, they aren’t realistic for most lifestyles, and I was happy to learn that good waves don’t require a lot of work.

It’s easy to look at people with different curl types and feel like their hair is better. Because I had been brushing my hair out for years, I wasn’t sure what it would look like when I let it be its curly self. I thought that there was a chance that it would become the ringlets of my preschool days, and when it didn’t, I started comparing my hair to a lot of people with tighter curl patterns than I have. I had to learn to love what I have and see that as beautiful, even if it isn’t perfectly structured curls.

The Curly Girl Method has a lot of rules, to say the least. There’s a long list of things to avoid, and I was so scared that if I broke the rules, my hair would freak out. Long story short, it didn’t. Straightening my hair and using products with ingredients that weren’t CGM-approved didn’t ruin my hair. Sometimes it’s fun to switch things up, and you shouldn’t be afraid to break CGM rules.

Back in January, I was sure that by the time 2020 ended, I would be a master of curly hair. I would understand every technique, have my routine down perfectly, and have beautiful waves every day. That just isn’t the case. As much as I have learned this year, I have also realized how much more I have to learn.