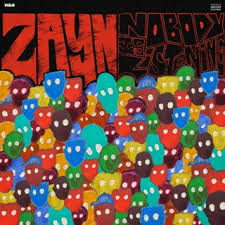 The ”Nobody is Listening” cover features a collection of colorful heads.

Zayn Malik’s new album, “Nobody is Listening,” explores the genre of R&B and continues to push his brand of low-key, steamy, good-vibe-filled music.

Malik announced the release of his third album on Jan. 7, the same day he released the second single from the album, “Vibez.” Zayn, who is rarely found posting on social media, was actively promoting his new music on platforms such as Twitter and Instagram. He even released a phone number, which when called, would let listeners hear snippets of each song from the album.

“Nobody is Listening” was released on Jan. 14 at midnight, and has 11 songs with a total run time of 35 minutes. This is very different from his previous albums: for example, his 2018 album, “Icarus Falls,” had a tracklist of 27 songs.

“Nobody is Listening” shows Malik’s singing and songwriting growth since he first started his solo career in 2016. This can be heard in his first single on the album, “Better,” which is a sweet song about second chances. The pleasant sound of the pulling electric guitar strings makes this song sound like a melody you would hear in a small café. With lyrics such as, “Or I’ll say goodbye while it’s right/Can we save tears in your eyes?” The first single sets the tone for the rest of the album with a guitar-centered R&B sound.

“Sweat” is another memorable song from the album. The sensual and passionate tune, despite having no actual explicit lyrics, is quite PG-13. The song features a strong beat and catchy lyrics, along with a strong chorus where Malik’s smooth voice shines, singing, “Oh, drippin’ down your body like gold.” The chord progression makes the song sound powerful. “Sweat” is reminiscent of the type of songs Malik had on his first album, “Mind of Mine.”

As many say, it is always good to save the best for last, and Malik nails this concept on the album.. The last two tracks on “Nobody is Listening” are by far the best on the album and arguably some of Zayn Malik’s best songs ever. “Tightrope” is a sweet love song about him and his significant other growing closer. With the chorus repeating the lyric, “Something told me it was you,” this song is the perfect feel-good tune. However, the part that makes it especially unique is in the post-chorus when Malik, who is part Pakistani, starts singing in Urdu. He croons, “چودھویں کا چاند ہو یا آفتاب ہو جو بھی ہو تم خدا کی قسم لاجواب ہو,” which translated means, “Are you the full moon or the sun?/Whatever you are, I swear to God, you are beyond compare.”

His final song on the album, “River Road,” is the perfect way to end the album. This track displays Malik’s voice with only a guitar accompanying him. The song starts out like a smooth lullaby with the lyrics, “Drinks to my liver, I cried down a river/for love ‘tis.” The chorus gets louder but soon fades to a quiet tone with Malik’s voice quietly singing out, “Lightly floating ecstasy.” This song feels simultaneously happy and sad, and it leaves the listener feeling at peace.

“Nobody is Listening” displays Zayn Malik’s vast vocal range and explores different genres within R&B music. The album is unlike most pop music today and provides songs that are calm without being boring. Malik has come a long way since becoming a solo artist and “Nobody is Listening” is his best project yet.