Settling the Debate About Which Streaming Service is the Best 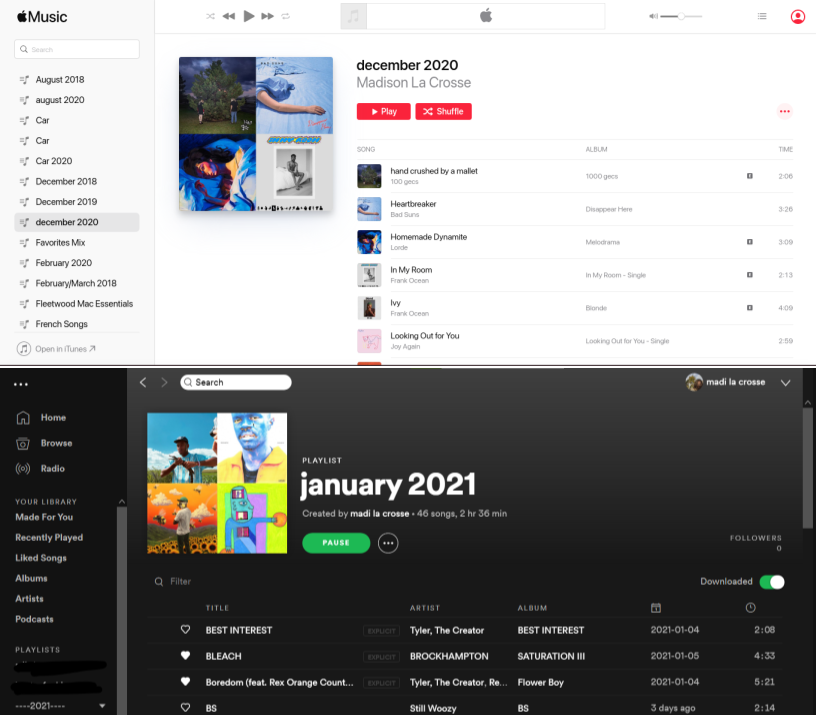 Spotify and Apple Music are similar visually in some ways, but they are also very different.

For the past two years, I have been an avid Apple Music user and was always getting made fun of by Spotify users. As the new year approached, I started thinking to myself, “What if I made the switch and gave Spotify a try?” and that is just what I did on Jan. 1 of 2021. In the past, I have used a lot of different streaming services, and this gave me the idea to try to settle the age-old debate: what is the best music streaming service? Although there are some other noteworthy streaming services such as Pandora, iHeartRadio, YouTube Music, and Amazon Music, I think the main debate lies between Apple Music and Spotify.

The Case for Apple Music
I think that there are a lot of benefits to Apple Music along with some downsides that made me want to give Spotify a try to see how it compares. For reference, throughout all of 2019 and 2020, I used Apple Music, and it treated me well. Some things I like about Apple Music are that you can easily find your friends’ profiles through your phone contacts, the layout is really organized and visually appealing, and it will show the lyrics to the song as the specific line is playing.

I also prefer Apple Music’s artist profiles because of how they’re set up. The first thing it shows is their most recent work, along with their top songs, and if you are interested, you can see how all of their songs rank. If you scroll further, it will show their essential albums, followed by all their albums and EP’s. Even further down, it shows music videos from the artist, which I find to be a super cool feature. It also tells you what other songs or albums they appear on, recommends some similar artists, and then gives an artist bio at the very end.

A big reason why lots of people use Spotify and make a case against Apple Music is because of the Spotify Wrapped made for users at the end of each year. This shows your top artists and songs of the year and gives you numerical statistics about your listening habits of the past 365 days. Spotify Wrapped also puts together a playlist of your top 100 songs. I think this is a super awesome feature, and a lot of people say Spotify is superior for it without realizing Apple Music does almost the same thing. Apple Music’s year in review is called Apple Music Replay, and although it does not give you as many obscure statistics, it shows you your hours listened to each artist, all your genres, and makes you a top 100 playlist of the year that is actually updated all throughout the year, meaning you can access it at any time.

Another super big plus about Apple Music is that it pays its artists a better rate than any other streaming service, which I find to be really meaningful.

There are a lot of plus sides to Apple Music but there are also some downsides. For one, there’s no absolute free version. A user can start a three-month free trial, but they’ll be charged $9.99 once that’s up. Another thing is that, although you can get Apple Music on the Google Play store, it’s far more catered to Apple device users just because it is under the Apple umbrella.

One thing that I also personally do not like is there is less organization among your playlists because you cannot sort them into separate folders like you can with Spotify. This is annoying for me as I make a playlist of my favorite songs each month and I really like being able to sort all the playlists by year.

Lastly, one big downside to Apple Music that turns a lot of people away is that there are fewer personally-catered playlists. Apple Music will make you personalized playlists, but they are nowhere near as involved or thorough as Spotify, so I find it a lot harder to find new songs or artists through this particular service, and I have found a lot of people who feel the same way.

The Case for Spotify
Truth be told, I used to use regular Spotify in middle school because it was free, and once I got a debit card I switched to Apple Music, so I have some experience with both regular and Premium Spotify. However, due to all the advanced features, Premium is the obvious choice if you have the money.

There are a lot of things I really like about Spotify that make it a super cool streaming service. For one, it is super personalized to your exact music taste and is constantly recommending new songs and artists. On your home page, you can find your “Daily Mix” playlists, which are all super specifically personalized. For me personally, Spotify has made me a playlist for every niche music interest I have, including hyper-pop, classic rock, and indie. While you make your own playlists, Spotify will also recommend around 10 new songs underneath, similar to those you have already added to the playlist, making it really simple to find some new songs.

Another thing I love about Spotify is the ability to see in-depth information on your friends’ listening habits. You are not able to see their activity on the mobile app but are able to on your computer, and I really like being able to look at what they are listening to. If you look on a friend’s profile, you can also see their public playlists, the artists they follow, and what they’ve been listening to recently. Spotify does a lot better than Apple Music at sharing music with the people around you in a more interactive experience.

One more thing that is really important to me is that Spotify users are able to sort their playlists into folders.This is a plus for me because I have so many, and it is way easier to find the playlist I am looking for. On your personal playlists, the site will also give you all the logistical information about each song as well as tell you when you added each song to the playlist.

There are a lot of plus sides to Spotify, but also some downsides. Personally, I find the mobile app fairly hard to navigate, just because it is more compressed and you have to search harder to find what you’re looking for. I think the Apple Music mobile app definitely beats the Spotify app. There are not many things I dislike about Spotify overall besides how the app is set up, but that is a pretty important feature so it definitely brings down my rating quite a bit.

All in all, there are good and bad to both sites, and I think it is definitely a matter of personal preference. There are so many similar features and places where they overlap so you are going to have an almost identical experience with either one. Overall, I personally prefer Spotify due to my preferences when it comes to organization and music recommendations, but I also really enjoyed using Apple Music because of some of its unique features. In the end, music is music and no matter which site you use, you are going to be able to listen to music however you like.