The Newest Addition to the “Hunger Games” Trilogy 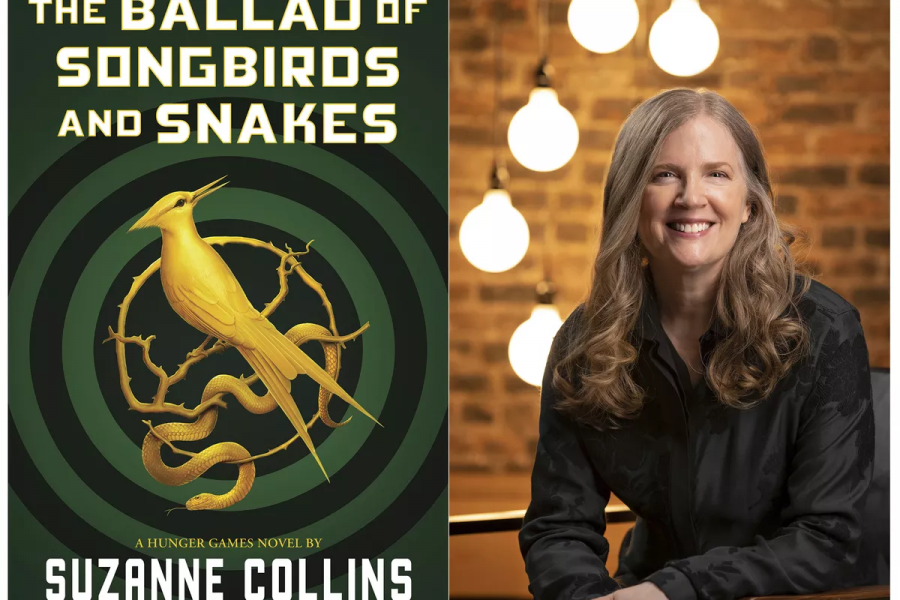 “The Ballad of Songbirds and Snakes,” written by Suzanne Collins, is the most recent spin-off of the Hunger Games Trilogy, which has sold over 100 million copies.

The “Hunger Games” Trilogy, a series written by Suzanne Collins, is a “New York Times” Bestseller, which later became a series of blockbuster movies featuring Jennifer Lawrence as the main character, Katniss.

In May of 2020, the series got an update as Suzanne Collins released a prequel to “The Hunger Games” titled “The Ballad of Songbirds and Snakes.” Recently, there has been talk that there may be a film adaptation of this book on the way. The new story focuses on President Snow, who is the main villain of The “Hunger Games” Trilogy. (Ooh, a villain backstory… interesting).

It takes place with Coriolanus Snow being the mentor for Lucy Grey (District 12) for the 10th Hunger Games. In this story, we see what life is like in the earlier days of the Capitol, as well as what is like for the mentor and people watching the games.

As an avid reader and someone who enjoyed the original books, I decided to review “The Ballad of Songbirds and Snakes” and also share my thoughts on the original series. I will rate each book out of 5 stars.

This Young Adult classic was published in 2008 and has come to be one of my favorites.

In the book, North America has become a nation known as Panem, which contains 12 districts and a 13th which was destroyed. The main character Katniss Everdeen is 16, and she lives in District 12, which is the poorest district. Every year, there is a competition called the Hunger Games, where contestants fight until only one person is left surviving. When Katniss’s sister is chosen to participate,  Katniss volunteers to take her place.

There are a lot of great things about this book. The plot is really good, there’s a lot of description,and the main character is multidimensional. I love that the female protagonist is not portrayed as a damsel in distress. There is romance sprinkled throughout, and the action/battle scenes are epic.

This sequel to “The Hunger Games” was published in 2009.

“Catching Fire” takes place after the Hunger Games. Katniss survives the competition. There is lots of social unrest and whispers of rebellion. Katniss previously showed defiance by professing her love to Peeta Mellark on T.V., but later there are speckles of romance between her and her childhood best friend, Gale Hawthorne.

In my opinion, this book was a little depressing.  I wanted originality, a rebellion, and Katniss starting a Revolution, not another Hunger Games competition. I gave it a lower ranking because I wanted something more unique and was also dissatisfied with the unnecessary love triangle.

This book, which was published in 2010, is the last of the trilogy.

In the story, all the districts of Panem have begun to rebel with Katniss as their inspiration after finding out that District 13 wasn’t actually destroyed. They have to fight the Capitol until they are freed, and with Peeta in the hands of the Capitol, it’s up to Katniss to save everyone.

This wasn’t a book I particularly enjoyed as some characters became evil, and there’s a certain character who dies, messing up the entire premise of the first book. I also felt the book was poorly done from the beginning because the revolution wasn’t built up well. It needed more substance, and it felt very rushed because there was so little on the subjects mentioned in the second book.

“The Ballad of Songbirds & Snakes”

I liked that the book did well connecting to the original for the most part. I also enjoyed that we saw how Snow turned to the evil side, which seemed to match the portrayal of this character in the earlier books. I also feel like the book wasn’t rushed, but instead felt very smooth. Even though I didn’t like it, it did seem fitting for the book to have another Hunger Games, as it matched the first book. I thought it was interesting to not have the main character in the games, but instead as the manager of the contestant.

The book itself wasn’t bad, but it was not original, because instead of experimenting with something new, the author stayed with her safety net and wrote about another “Hunger Games”. The romance between Lucy, the contestant from District 12, and *whoever else was involved in the romance* was not what I wanted. Why do authors always dab their little hands in that section? It just felt forced.

Other than that, I thought the author did pretty well in creating the villain backstory, the story didn’t get too mushy, and in the end I was oddly amazed at how slowly he turned from a regular person to an evil villain.

All in all I think the new book was pretty average, but I definitely recommend this series if you haven’t read it already. I hope this review has helped you to make your decision.