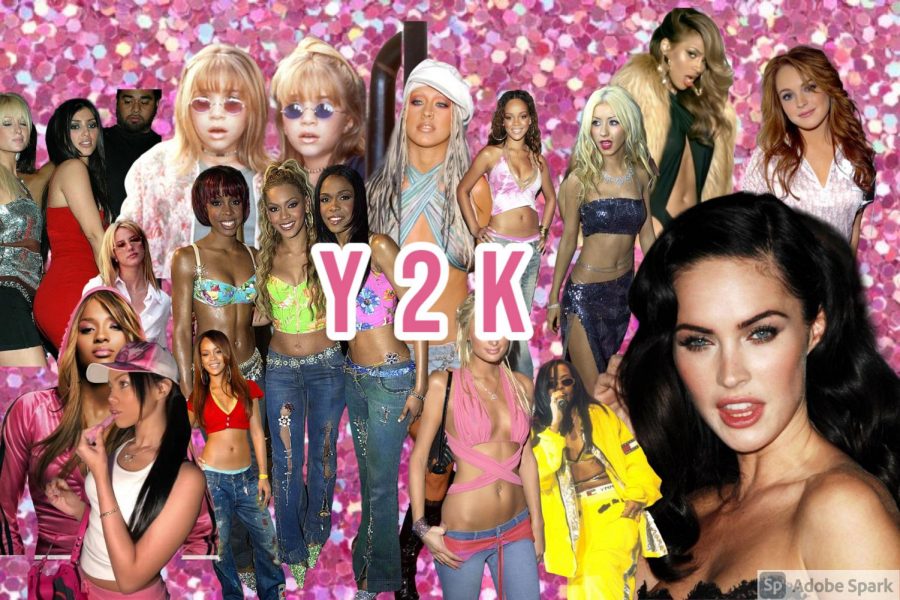 Glitz, glamour, and attitude were staples of the 2000’s. Be as bold and bright as you can, and these icons embraced that.

We’ve all noticed the sudden resurgence of Y2K fashion in 2020. The belly shirts, the low-rise jeans, the trashy glamour, and the collection of tiny designer bags. Many have credited these trends to icons like Paris Hilton, Britney Spears, Christina Aguilera, and Kim Kardashian. Are we noticing a pattern? Except for Spears, these are all white women with very problematic pasts and presents. Most of these women have done nothing but steal from different cultures for aesthetics while spewing racist slurs and remarks in the same breath.

When it came to fashion, most of these celebrities were actually having a hard time. This is shown through Britney and Justin Timberlake’s full denim red carpet look (iconic but still), Paris Hilton’s asymmetrical skirts that were exclusively blue and pink, and Kim Kardashian’s oversized belts worn over regular shirts. These are just a few examples of fashion crimes committed in broad daylight by these women.

In reality, the truly memorable Y2K trends can be attributed to Black women like Rihanna, Beyoncé (plus the rest of Destiny’s Child), and Aaliyah. These women actually started wearing all of these styles in the ‘90s. Aaliyah was the It Girl, and she dominated every field she was in, but she’s never involved in the conversation when it comes to fashion in the early aughts. Aaliyah tragically died in 2001, so she wasn’t able to experience Y2K in all of its glory, but she still managed to leave her mark on the decade with her trailblazing of most of the great trends that came with the decade.

One of the first images that pops up when you search Y2K fashion is a picture of Destiny’s Child on the red carpet wearing cropped bustiers, exposed bedazzled thongs, and low-rise jeans. They portray the epitome of Y2K glamour that we can still see mirrored today.

Black women ruled style and fashion in the ‘90s. They also ruled the 2000s through the R&B and Hip Hop Scene with the ‘90s Video Vixen showing the thin eyebrows, snatched bodies, low rise jeans, bedazzled flair, belly button rings, and everything you’d see credited as Y2K. These women are overshadowed by mediocre and problematic white women when we look back for inspiration, and they’re also overlooked when looking at the current fashion scene. The TikTok fashion community is one of the biggest offenders.

We can see this when analyzing one of the biggest Y2K creators on the platform, Shy Smith (@shycsmith). She has appeared in “Vogue” and has gained over 4.4 million likes during her time on TikTok. But even with all of this success and acclaim, she’s still a victim of racism and misogyny, which she is very open about. She has responded to comments from men — usually white, gay men — who have put her down for wearing extensions, “wanting to be white,” cosplaying Megan Fox while being Black, and just being Black in general.

In fact, white creators on TikTok are praised for being Y2K and trashy glamorous while Black creators — Black women especially — are constant victims of unnecessary hate, often having their ideas stolen. White creators usually don’t fulfill the Y2K aesthetic in an accurate way to begin with. Some of them wear cropped cardigans, mom jeans, and cow print bags and claim that their style is Y2K, which is just watering it down and not even coming close to the true aesthetic.

Non-Black people on TikTok and in real life are notorious for stealing and claiming trends that were created by Black people and watering them down to a point where they’re unrecognizable, and Y2K is no exception. Some white creators have coined the term “cyber ghetto”: a watered-down version of hood and ghetto culture mixed with Y2K that is deemed okay for non-Black people to wear. Essentially, appropriating Black culture for the aesthetic.

Non-Black people steal from Black people and then hate on Black people for participating in the trends that were stolen from them. Black women being erased and looked over during the discussion of Y2K is no coincidence or one-time thing. Things like this always happen without fail to Black women, and it shouldn’t be a surprise. Despite everything, Black women will keep pioneering everything and persevere because that’s what they do. In the words of Shy Smith, “You can’t get rid of me. I’m staying right here.”