Why the ACT is More About Test Taking Than Intelligence 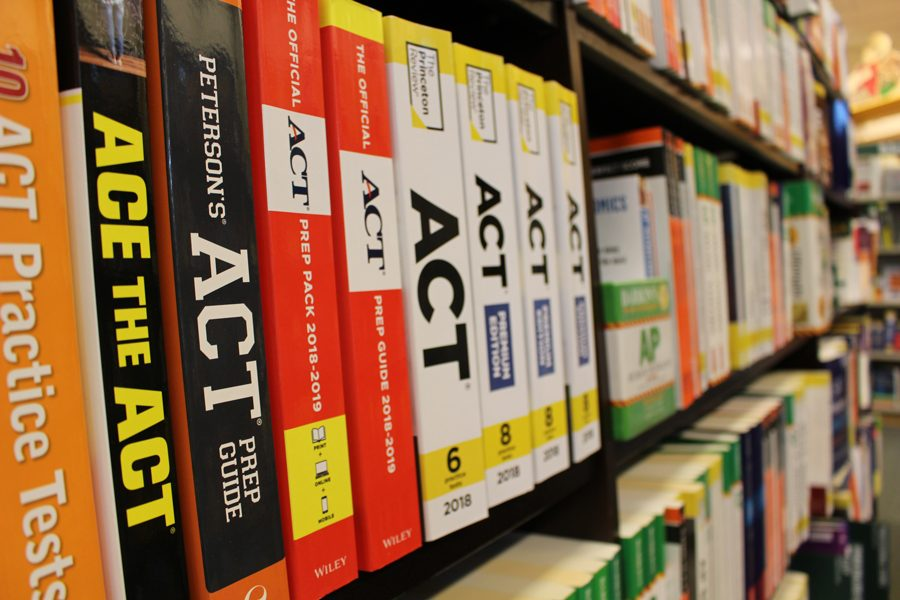 Common test prep books used to study for the ACT. Many Middleton High School juniors will use these to prepare for their test day on March 9.

For high school juniors nationwide, the ACT is coming in March. This required day of testing is a day most students will dread: almost four hours of staring at blank bubbled pages, wracking their brains for information they have studied — or not studied — over the past few months. But what does a timed multiple-choice test have to do with an individual’s smarts? Nothing, really. A 2020 study by the American Educational Research Association found that high school grades and GPA are five times stronger than ACT scores at predicting who will graduate from college. There are many other similar studies that have found the same: a student’s GPA much more accurately defines how well they will excel in the future than an ACT score. Therefore, the score an individual receives on the ACT does not measure their intelligence whatsoever.

So if the ACT isn’t evaluating a student’s intelligence, what skills is the ACT measuring? Simply put, the ACT analyzes a student’s ability to take a test. When it comes to the ACT, there is little material to study in preparation except studying how to take the test itself. This is why practice tests are often used to prepare, as they help a student practice test taking. The ACT cannot accurately reflect intelligence because it does not test students on any background knowledge (save a few math and English concepts). Instead, the ACT uses patterns that a test taker can only recognize if they know the hidden tricks of the ACT question writers. These ‘tricks’ are what must be studied in order to do well on the test. In its entirety, the test is really just 4 hours of reading comprehension. Don’t believe it? Try solving this real ACT math problem.

At first glance, this looks like a pretty easy problem. Most people would start by doing 36 + 5 + 1 and get 42. However, this is wrong because the problem says the tablecloth hangs down “all the way around”, which means you must add 5 + 1 inches on each side. So, the full length would be 36 + 5 + 1 + 5 + 1, making the correct answer 48. Even for those who were able to get the question right on the first try, it is evident how this could easily be done incorrectly if the test taker mixes up a few words while reading the problem — which is easy to do when students are trying to read quickly so they don’t run out of time. The actual math in this problem is very simple, therefore the only subject this problem actually tests is a student’s reading comprehension.

Next, take a look at this problem from the English section:

Although the reading passage that goes along with this question is not provided, the answer can actually be found without it (except that NO CHANGE is not visible, but that is the wrong answer in this case anyway). The question asks for the choice that “most specifically illustrates how long the cave-creating process took.” This can be simplified to “which answer is the most specific?” Therefore, the answer would be “B,” because it is the most specific indication of a lot of time passing. A test taker solving this problem does not need any prior knowledge on advanced English to answer this question. This again shows that all the student needs to do in order to get the right answer is read the question correctly, and all the ACT is assessing here is a student’s test taking ability.

When it comes to applying for college, students often feel that their ACT score defines a part of who they are. Although standardized test scores — like ACT scores — are still an important determinant of whether universities will accept an applicant, these scores are not an accurate reflection of a student’s intelligence. These tests also do not determine other factors, like whether or not a student is likely to graduate from college. Furthermore, those who have the resources and money for practice and tutoring often do better than students who are unable to prepare, which creates an unfair score gap. Exterior factors like this — and students’ test taking ability — are what determine the score someone will receive on the ACT, more so than having prior knowledge. So, to MHS students taking the ACT in the next few weeks, don’t worry if some questions are difficult. Even if an unsatisfactory score is received, just remember that taking four hours to fill in bubbles does not determine intelligence.