“The American Pageant” Has Got to Go 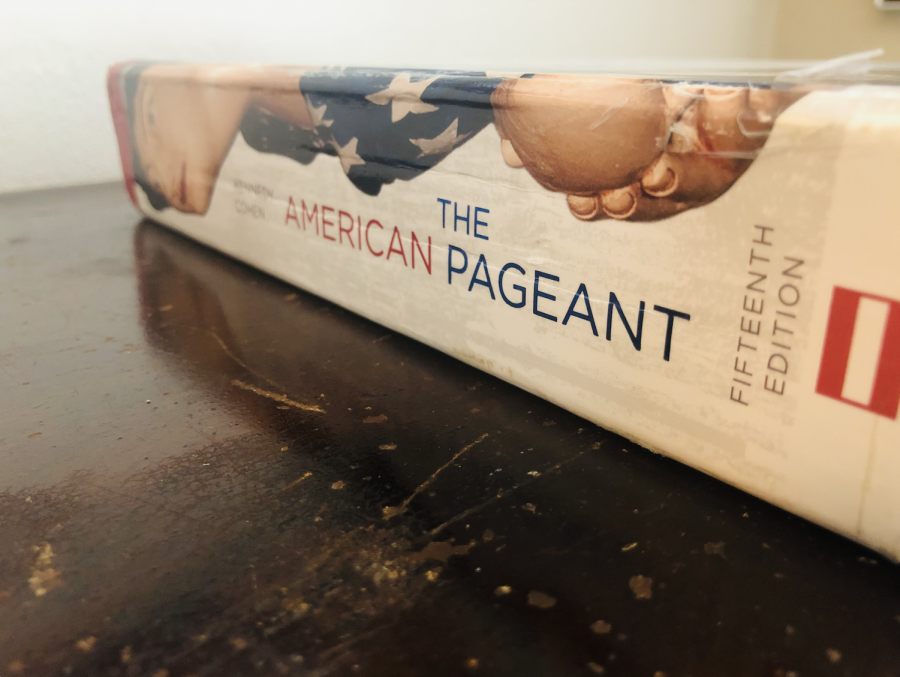 “The American Pageant” by David M. Kennedy and Lizabeth Cohen is the AP U.S. History textbook used at Middleton High School. This text has a record of portraying problematic and racist ideas to school communities. Messaging like this has lasting negative effects on the groups that it infiltrates, such as harming people of color and bolstering white power. In order to put an end to this vicious cycle, “The American Pageant” has to go.

Contrary to common assumptions, history is a dynamic field of study. Though the events that have transpired in the past cannot change, the way that people choose to study them should. For centuries, Black history in the United States has been (and continues to be) colonized, misrepresented, and silenced. Another side effect of racism in our country, marginalizing the voices of people of color in American history is all too prevalent.

The way that history is depicted matters. In the context of a high school, it is crucial that students receive the full story of how our country came to be. Words are powerful because they influence the opinions students internalize when it comes to race and racism. Not only is it important whose voices are heard, but the voices not heard are also incredibly impactful. There is no way around the fact that Middleton High School fails to represent non-Eurocentric perspectives in the study of history.

Part of this issue represents a larger, national trend of deeply ingrained racist attitudes that influence nearly every facet of every American’s life. Dating back to the earliest days of the Atlantic slave trade, Black people in the United States have been oppressed, killed, silenced, imprisoned, disenfranchised, misrepresented, and undervalued. Since then, the Jim Crow South, the War on “Drugs,” the unjust justice system, and even racial prejudices among individuals have contributed to racism on a policy-based level.

Though its deeply penetrating roots are in our countries’ most powerful institutions, racism is also seen in our classrooms every day. One major way this is demonstrated is in the textbook studied in AP United States History classes: “The American Pageant” by David M. Kennedy and Lizabeth Cohen (initially written by Thomas A. Bailey in 1956). Frankly, it is a blatantly racist, Eurocentric account that has no place in any classroom. Yet, it is the “best-selling AP U.S. History text” in the country, according its publisher, Cengage.

There are countless examples of racism in this book. From the use of racial slurs to the demonization of Malcolm X to the overall tone-deaf attitude, there is much left to be desired in “The American Pageant”. Author, race historian, and professor Dr. Ibram X. Kendi examined some of these issues in his critical analysis of “The American Pageant” with CBS News. This article also explained that while the College Board includes “The American Pageant” on its list of adequate books for the AP U.S. History curriculum, the Southern Poverty Law Center gives it a 60 percent rating on how well it provides instruction about American slavery.

Among the issues discussed by Kendi is the depiction of kidnapped Africans as “immigrants” on a map showing migration patterns to North America. The implication of this incorrect representation is that Africans had a choice to migrate to the United States. In reality, they were the victims of one of the largest human trafficking schemes in American history. To confound the movement of Africans with that of white European immigrants is to obscure the distinctly oppressive experiences of Black people who were forcibly transported.

Another passage of blatant racism occurs on page 344 underneath the subheading “Free Blacks: Slaves Without Masters”. Right off the bat, the authors of “The American Pageant” use the term “blacks” in a dehumanizing fashion when referring to Black people. Instead of simply acknowledging their humanity, they repeatedly refer to people by a term which has a history of being used as a weapon for racism.

Moving deeper into the paragraph, the authors begin to describe the demographic of Black people who were free in the 19th century. The book reads, “In the deeper South, many free blacks were mulattoes”. Utilizing the word “mulatto” to refer to people of mixed Black and white descent is incredibly dehumanizing because, as described in Kendi’s analysis, “it was essentially a racist slur.” The word “mulatto” comes from the false and inherently racist idea that white and Black people are separate species, so someone of mixed races would not be able to reproduce, hence the root word “mule”. There is no question of whether or not this term should be used to refer to people at all, let alone in an informational account of American history. It is dehumanizing, blatantly racist, and objectively incorrect.

Further, in describing these free people of mixed race, they say that they were “usually the emancipated children of a white planter and his black mistress.” This characterization of the relationship between a white slave owner and a Black slave is entirely false. Referring to a Black woman slave who shared offspring with her white owner as a “mistress” implies some sort of consensual, if extramarital, relationship. The truth is that consent can not be given within the context of a slave-owner relationship because of the coercive power dynamic. Therefore, sexual relations between a slave and her owner would be, correctly, classified as rape. By using the word “mistress,” the authors of “The American Pageant” effectively dismiss the trauma that comes from an experience like sexual assault and cover up this part of history which has had long-term effects on the way Black and white people are treated in American society.

CBS News also consulted Dr. Naomi Reed, a sociological anthropologist and professor, in their analysis of “The American Pageant.” She highlights that the authors of the book are “taking narratives that should be narratives of historical injury of black people and turning them into stories of white pain.” She points to the fact that the textbook entirely fails to describe the meaning and power of the N-word, such as how it was used against Black people in history or the present.

Additionally, Reed explains that civil rights leaders are portrayed incompletely in order to better serve the white narrative; for example, “Martin Luther King Jr. is sort of always colorblind, peaceful resistance, versus Malcolm X is always violent, militaristic and radical,” says Reed. This characterization only serves to make white people more comfortable in their whiteness and allows them to shame Black people for being angry when they believe they are owed pleasantries. In other words, white people can express their racism through their entitlement while also being able to perform political correctness by applauding MLK.

While MLK’s work during the civil rights movement was partially recognized, it should be noted that Black accomplishments are largely omitted from “The American Pageant.” Very little Black history is demonstrated, and when it is, it often comes from a place of condescension, as if the only Black history that exists is the experience of slavery. The countless accomplishments of Black Americans are rarely brought to light, which creates harmful assumptions about who can be successful. It also fails to reveal the extent to which American innovation, education, and progress can be attributed to Black people, allowing white people to continue to take credit where they shouldn’t.

This kind of historical erasure represents the larger theme of “The American Pageant”: In order to portray the Eurocentric history that’s favorable to the interests and fragility of the white authors, Black history is silenced, and the implications of this have been playing out in the instruction of American history for centuries. When Black history is underrepresented, white people are able to ignore the structural and institutional systems which have been designed to oppress. Instead of contextualizing the marginalization that Black people experience, it is seen as individual, isolated incidents which have no meaning beyond the present moment. And when this happens, racism prevails.

This is why it is so harmful when textbooks like “The American Pageant” are used to communicate the defining events of United States history. Because they invalidate the experiences of Black people in America, they perpetuate the illusion of neutrality in issues of racism. When offered an inherently racist account of history, students internalize ideas they cannot even identify as racist. They think they can be “not racist” without being actively antiracist. They grow up believing things that are destructive, harmful, and dangerous without having the context to see beyond their prejudices.

Kendi insists that “when we instruct our children, we should be instructing them in truth.” But “The American Pageant” fails at portraying American history truthfully. The damages of this reality have already infiltrated the student body at MHS and at many other schools across the country. If swift action is not taken, students will continue to internalize racist values, the Black experience will continue to be invalidated, and Middleton High School will fail to be an antiracist institution.

The MCPASD school district should always be striving for better. Instead of continuing to instruct the racist material contained in “The American Pageant,” the district should use the power they have to offer accurate, diverse, and antiracist resources. Middleton must do a better job of creating safe, validating, and equitable educational spaces for Black, Indigenous, and students of color to occupy. We must commit to the truth. And that means it is time for “The American Pageant” to be retired.