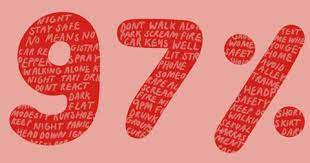 97%: a symbol pushing for a future with no sexual harassment or violence against women and girls.

97%. A number that has been seen on almost every social media platform. But what does it mean? It’s more than a number. It’s a symbol leading a movement of women who are pushing for the end of harassment against women.

Sexual assault and harassment against women has been around for many years, but the death of one woman in Britain has sparked a fire among women of all ages. Sarah Everard, a 33 year-old woman, was abducted and killed on Mar., 2021. She did everything “right” on her walk home: she spoke with her boyfriend on the phone and walked on a well-lit street. But she was still taken. Her death is one that many women fear, and people feel it is time to make a change.

The United Nations Entity for Gender Equality and Empowerment of Women (UN Women), is a branch of the UN that has a goal to “develop and uphold standards and create an environment in which every woman and girl can exercise her human rights and live up to her full potential.” The UK branch of the organization recently did a study of over 1000 women living in the UK. The results were shocking. Seventy-one percent of women in the UK said they have experienced sexual harassment in public. Another startling fact is that only three percent of women aged 18-24 had never experienced any of the behaviors they were asked about, meaning 97 percent of the surveyed age group had experienced some form of sexual harassment. This statistic shocked a lot of people, and many resonated with it. This has led to the trend of young women on TikTok sharing their stories of being in the 97%.

However, whenever there is a movement for change, there will always be people who disagree. There have been many accounts discussing how the survey is not reliable because it was done in Europe and only had a little over 1000 participants. Many argue this criticism is baseless, since for a survey to be reliable, you only need 500–1000 participants.

The movement created by women has been one to make a change and protect the younger generations of girls to not have to worry about being a part of the 97%. Even so, many men have taken this as a personal attack. They trended the hashtag “#NotAllMen” to show that some believe blaming every man for this is not a fair accusation and that being wary of men is an irrational fear. But many argue that some fail to realize they are not being called out individually, but being told they need to help women in this fight. It takes everyone to make a change.

Middleton High School even has its own club dedicated to reducing the 97%. Join Middleton’s Sexual Harassment and Assault Prevention in Education (SHAPE) Club and follow them on Instagram (@shapemhs).