The Cardinal Chronicle • May 31, 2021 • https://mhscardinalchronicle.com/3478/arts-and-entertainment/sour/ 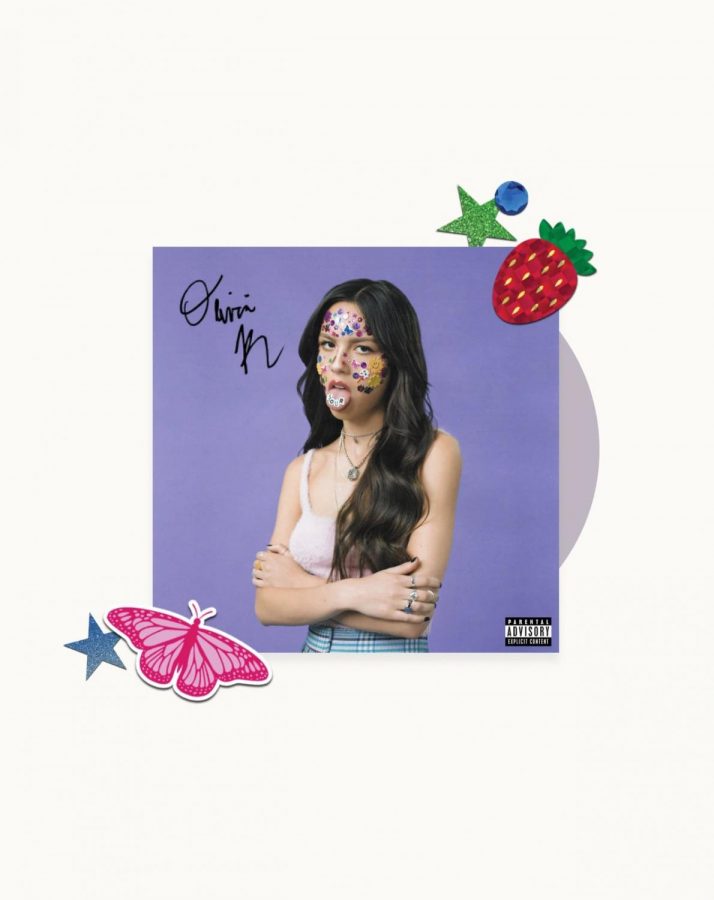 Olivia Rodrigo released her debut album “Sour” on May 21, 2021, and she’s already on her way to breaking records.

Rodrigo, who is only 17 years-old, stars on the Disney Plus show “High School Musical the Musical the Series” (HSMTMTS) and appeared in Disney Channel show “Bizaardvark.” In January 2020, Rodrigo released “All I Want,” which debuted on HSMTMTS in November of the previous year. The song, including lyrics like, “And I won’t fight for love if you won’t meet me halfway” resonated with many heartbroken teens. Now, she is back with the same type of music that tells the story of young love and heartbreak with catchy melodies reminiscent of Taylor Swift.

On Jan. 8, the first single was released from the album, titled “Driver’s License.” It became an immediate hit. The song was everywhere: on social media, radios, and teenagers’ playlists. “Driver’s License” shows the perspective of a girl driving around with her newly-earned driver’s license, remembering the time she spent with her ex-boyfriend.

The lyric, “And you’re probably with that blonde girl,” has sparked debate among Olivia’s fans, with many speculating that the song is about her supposed ex-boyfriend, Joshua Bassett, and who seems to be his new girlfriend, Sabrina Carpenter. Although Rodrigo and Bassett have never confirmed that they dated, that has not stopped the running minds of teens watching Hollywood drama closely.

Despite the teenage drama, Rodrigo’s “Driver’s License” is hugely popular in its own right. The song debuted at number one on the Billboard Hot 100 Chart and even broke the record for most streams in a single day for a non-holiday song, racking up 17.01 million streams in just 24 hours.

When Olivia released her album, many listeners noted that the main theme was heartbreak. However, not all of the songs were slow and sad. One song that stood apart from this vibe was “Brutal.”

“Brutal,” a fan favorite, is about teen struggles and being upset with life. If you were to measure the amount of teenage angst in this song, the numbers would be off the charts. With a melody quite similar to “Misery Business” by Paramore, this song is perfect to blast when you’re in a bad mood or want to feel like the main character in an early 2000’s teen movie. With lyrics such as, “And I’m so sick of seventeen/Where’s my f***ing teenage dream?/ If someone tells me one more time/ ‘Enjoy your youth,’ I’m gonna cry.” You can hear Rodrigo’s annoyance, similar to millions of other teens, about how hard it is to be a teenager today.

On the more upbeat side of the album, “Good 4 U,” Olivia’s third single off of “Sour,” tells the narrative of a girl who is incredibly angry at her ex-boyfriend for getting over their relationship so fast. The music video for the song contains parallels to the movie “Jennifer’s Body” and shows Rodrigo singing angrily while the room is on fire behind her. The video fits the “psycho ex-girlfriend” vibe of the song perfectly. This third single helped break records for Rodrigo. Between May 21–27, she broke her own streaming record and achieved 84,131,760 streams globally according to Spotify. She also became the first person ever to have her first three debut singles reach the top 10 on The Billboard Hot 100.

One of the most memorable songs on “Sour” is “Traitor.” “Traitor” demonstrates Rodrigo’s heartbreak as she sees her ex-boyfriend move on so quickly after their breakup and shows how she feels as though he has betrayed her. This song has spread like wildfire on the social media app TikTok, used by people to share their own stories of heartbreak or to make sad edits about their favorite tragic fictional couples. The song is filled with tear-jerking lines such as “God I wish that you had thought this through/Before I went and fell in love with you.” The combination of the sad lyrics and beautiful layered harmonies in this song demonstrates Olivia Rodrigo’s incredible talent as an artist and puts her vocals and remarkable songwriting skills on display.

“Sour” has heartfelt songs that show how talented of an artist Rodrigo is. The records she has already broken and the awards she is expected to win are just a few of the reasons as to why many of her fans are calling her “the next generation’s Taylor Swift.” This debut album is an amazing display of her capabilities as an artist and is an album that can be listened to by all.