A Review of The “All Too Well” Short Film 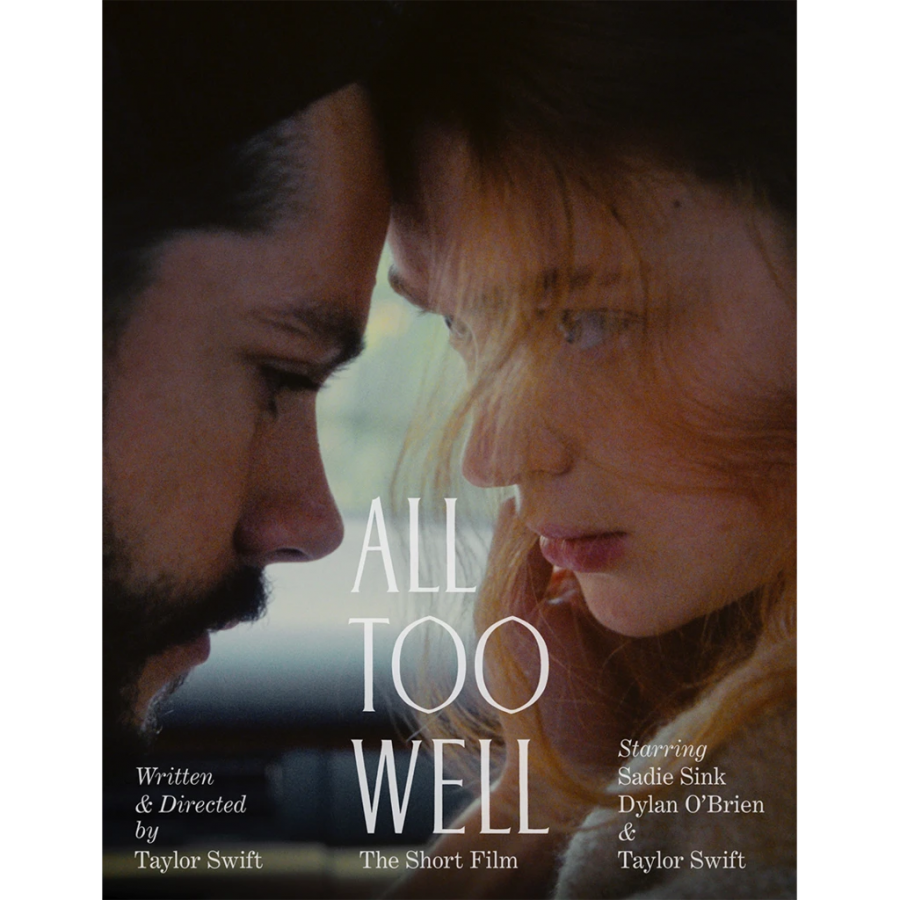 The All Too Well Short Film (2021) was written, directed, and starring Taylor Swift.

Amongst the announcement of Taylor Swift re-recording her fourth studio album with full ownership, she also announced that she would be releasing a short film to go along with her hit song, “All Too Well,” which is ten minutes long, but had to be cut down originally.

We now get to hear the uncut version of this song with all of the storytelling and heartbreaking lyrics that she originally wrote alongside co-writer Liz Rose during her Speak Now tour in 2012. We also get to experience it with a film that Taylor wrote, directed, and starred in alongside actors Dylan O’Brien and Sadie Sink.

Bringing her story to life with producer Saul Germaine and cinematographer Rina Yang,  “All Too Well” unlocks a side of the story never before seen and changes the experience of listening to the music. Taylor states in an interview with “Entertainment Weekly” during the film’s premiere in New York, “A record label didn’t pick this song as a single. We never made a video for it. This was a song that started out as a simple track five. It was about something very personal to me. It was hard to perform it live. Now for me, honestly, this song is 100 percent about us and for you.” Before moving on to the next paragraph, please be warned that their are spoilers to the short film. If you would like to go watch it first, here is the link.

The film opens with a quote from Pablo Neruda, writing, “Love is so short, forgetting is so long.” The opening scene shows the two main characters, who are never directly given names, while Sink’s character asks O’Brien’s, “Are you real?… I just feel like maybe I made you up.”

The first section of the movie starts with the feeling of a new romance. The opening scene begins the journey of the scarf. Sink’s character leaves it at her love interest’s sister’s house. The scarf is something that fans have taken into their own hands when it comes to the meaning, but all that we know for sure is that near the end of the song, Taylor Swift writes in the lyrics that the love interest of the song keeps the scarf because it reminds him of her.

This can tell us a lot of things about the dynamic and the ending of the relationship. Keeping the scarf even though they are no longer together can mean that even though it was her that got hurt, the love interest can still have some sort of attachment and connection to her.

Then we get into the actual storytelling of the short film. The first section is about the two main characters taking a trip, very in love, and shows the beginning of their romance. The cinematography of this part shows Sink’s character always looking at O’Brien. The film also takes place during the fall because Swift has stated many times that “Red to her feels like a fall album.

But then, the following section shows the beginning of the problems in the relationship. Sink goes to a party with the love interest and his friends and we can see problems beginning to arise when he is not paying her any attention. She reaches for his hand to show affection and he drops it, and she looks both shocked and hurt by this gesture. All of his friends are older than Sink’s character and she seems to be intimidated by them, so this furthers Sink’s detachment from him and the scene that she is in.

Then, it cuts to O’Brien getting out of a car with Sink and being on the phone with someone unknown, seeming very upset, all the while Sink is looking very worried. When he returns to the car, he comforts her. This only begins to show the dynamic of the relationship which includes possible secrets, him being in a later phase in his life than her, and him trying to dismiss her even when she has the right to be feeling the way that she does.

It then cuts to the first time that we hear the characters speak in the film. They are fighting, specifically about the party they were shown at earlier. Sink looks visibly upset and expresses that anger to O’Brien when asked. He invalidates her feelings by making it seem like she was being irrational and selfish. Sink expresses that she did not like the way that he acted around his friends and ignored her, especially since she was intimidated by them. Once Sink has become upset, O’Brien comforts her, saying that he did not want to fight and helps her calm down while repeatedly apologizing even though her feelings still seem to loom. Then it cuts to more scenes of the relationship, showing Sink being caught up in the good and magic moments of the relationship.

The next scene that is shown is called “The Breaking Point.” The viewer cannot hear what the characters are saying, but can see that O’Brien is ending the relationship. The camera angle shows O’Brien higher up then Sink, showing the dynamic of the relationship and more specifically how the love interests must be feeling in this moment.

The next scenes are Sink breaking down and O’Brien trying to reach her while she ignores the attempts. She begins to write something on her typewriter as she is recovering from the pure heartbreak that is encapsulated in the film.

The next scene shows Sink at a sophisticated party. She looks to feel out of place and overwhelmed and  just stays off to the side. It cuts back to memories of the relationship, such as O’Brien’s character charming her dad, and her 21st birthday party with her friends, where it is obviously tell that she is still distracted. The film cuts back to Sink being distressed by the ending of the relationship and her feeling nostalgic about the situation.

Next, the film shows O’Brien’s side of recovery. It is clear that he also has the relationship on his mind, but he is trying not to remember. The next scene brings the whole film together. The screen says “Thirteen Years Gone” and the perspective is from Sink’s character, but now played by Swift herself. It is at the signing of a book that she has written about the relationship and heartbreak.

The book is called “All Too Well,” and the camera pans off and the older version of O’Brien’s character is looking in from outside and watching her success, while also thinking about the relationship as a whole.  The scarf is tied around his neck and that part of the story has come full circle.

This film was truly a beautiful thing to view. As it was Taylor Swift’s own creation, it gave us an image to go along with the song and the already beautiful lyrics that she made all those years ago among the heartbreak that she was experiencing. The viewer feels the feelings that younger Taylor must have been feeling, torn between the sadness and the whirlwind of a relationship that it was. The imagery of the film swept the viewers into the emotions of a heartbreaking romance during the film.

O’Brien and Sink’s acting encapsulated what Taylor wrote about all those years ago and they showed so much emotion in the film. I have watched this film more times than I would like to admit in order to truly enjoy the detail and thought that was put into the creation of the film. All in all, this was a beautiful film to go with a beautiful song, album, and songwriter.