Music, Dancing, and Coming Out: the Harry Styles Concert Experience 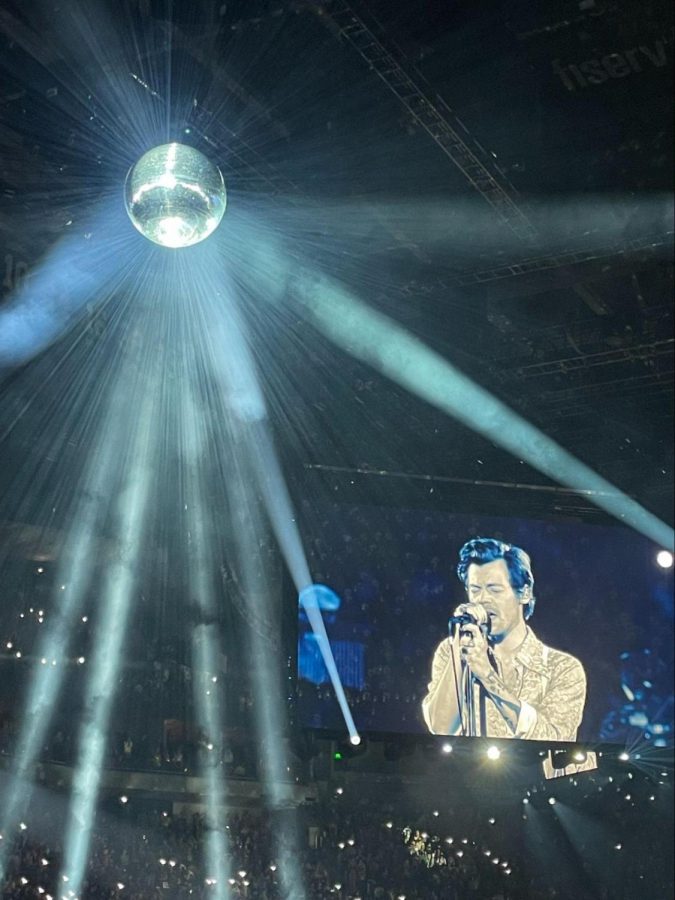 Harry Styles performs “Lights Up” and spins disco balls during his concert in Milwaukee.

Concerts are meant to be a fun experience, seeing your favorite performers live and having an unforgettable time. Harry Styles’ performance in Milwaukee, Wis. on Nov. 3 was all that and more. Styles, 27, is a British singer most famously known for being in the boyband One Direction. However, he has turned into a successful solo artist, having released two albums.

On the morning of Nov. 3, I left for school like a normal day, throwing my overnight bag in the backseat. The school day felt long and drawn-out, and I was on edge all day, ready to leave after seventh block. When the time finally came to go, my friend, whom I was attending the concert with, and I swiftly made our way to my car and left for her house.

Upon arriving, we took the time to get ready in fun outfits, as Harry Styles concerts had become somewhat of a fashion show among fans. With our vaccination cards and feather boas in hand we began the two-hour drive to Milwaukee.

The time in the car sped by, and soon we were arriving in the big city of Milwaukee. The closer we got to The Fiserv Forum, the more and more fans there were on the streets. We managed to get a good spot in the parking garage and began our walk to the concert venue.

As we walked, we noticed other people’s outfits and pointed out which ones we liked. We crossed the street and walked into the doors of the large Fiserv Forum, where excited teenage girls and long lines awaited us. Once we found our seats (and took some time to take pictures), we were jittery, as our seats were even closer than we thought they would be.

The lights went down, and Jenny Lewis, the opening act, began to play. I had never heard of her before, but one song that I enjoyed listening to was “Just One of the Guys.”

As Jenny finished her set list, the room was buzzing with excitement. The venue was playing music, and everyone was singing along to “Bohemian Rhapsody” as we waited impatiently for Styles to get on stage. As the song ended, a western-cowboy sounding tune began to play and the lights dimmed. It was nearly time for him to be on stage.

As Styles rose up from underneath the stage, thousands of screaming voices filled the venue as he began with his first single on his sophomore album “Fine Line,” titled “Golden.” He sang through several songs before stopping to talk to the crowd. The energy in the room was indescribable, but everyone was having the time of their lives (besides the middle-aged woman sitting next to me who looked like she did not want to be there).

Styles was very engaging with the crowd between songs, occasionally taking breaks to read signs or crack jokes. One of the most heartwarming parts of the concert was when he helped a girl come out to her mother, who was sitting in the balcony behind us. “Lisa, she’s gay!” he shouted enthusiastically as the mother became emotional on the big screen. Harry, who is a strong ally of the LGBTQ+ community, also picked up pride flags thrown on the stage and waved them around.

My personal favorite moment of the concert was when he read a joke off of a sign and called it “a stinker!” (I’m not quite sure what that means but I’m gonna assume it’s a British thing). All in all, the set list was great and it was a very engaging, exciting, and emotional experience.

Before he left the stage, he played the tear-jerking song “Fine Line” and disappeared off the stage, leaving everyone with mascara running down their faces in a state of numbness. However, moments later he appeared back on stage to play an encore consisting of his more rock-esque songs, leaving the concert with much more hype energy.

If I’m being totally honest, much of what happened after the concert was a blur. My throat hurt, I was sweating profusely, and I couldn’t hear very well. All while this was happening, Kendrick Lamar’s “HUMBLE.” was playing on the speakers.

As we left the venue, there were a million different colors of boa feathers flying all over. As we got to the car, my friend and I immediately started showing each other the photos and videos taken, and before we could make it back to her house, I had passed out in the back seat in a deep sleep.

As someone who had not become a fan until two years ago, I was quite lucky to get tickets to this concert as Harry Styles has become more and more famous. The concert experience was one of the best nights of my life, and I cannot wait until he goes on his next tour so I can relive it all again.