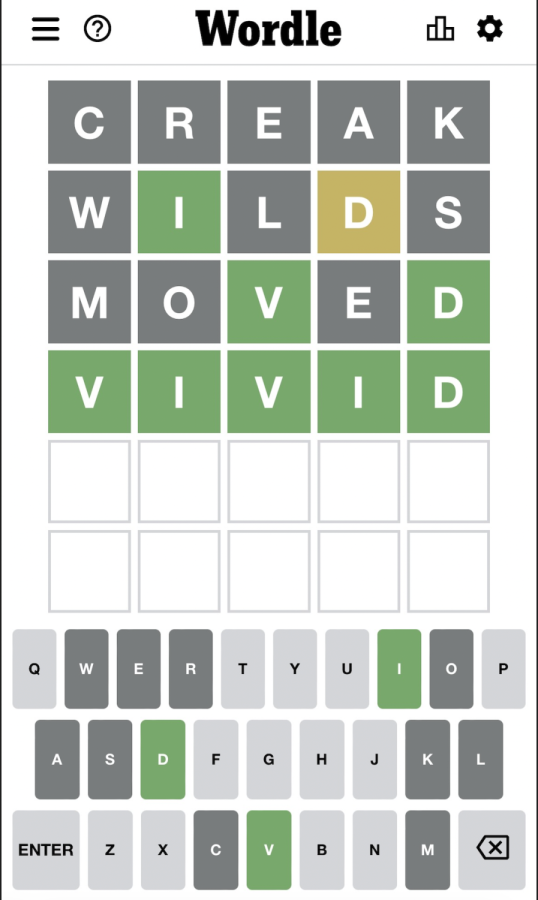 Six months ago, most high school students probably didn’t expect to spend several minutes each day testing their vocabulary of five-letter words. And quite frankly, we should probably be alarmed now that many of them do.

Josh Wardle’s word game, Wordle, has amassed millions of followers since its release in October 2021, including many students at Middleton High School.

Part of the game’s allure is that it can be played only once a day, which makes it something to look forward to each morning and means Wordle fans are not pestered by push notifications throughout the day.

Wordle is a daily conversation topic, especially online, and more specifically on Twitter. MHS hosts many Wordle discussions, too, as murmurs about guesses and scores rise from the classroom and halls.

Junior Bella Starr has been playing Wordle since before it went viral, which is impressive considering how rapidly its player base grew. “I’ve been playing it for a while,” Starr said. “I’ve always liked games like [Wordle] — weird word games.”

Most students started playing after hearing about the game from friends or family. Katelin Gaffeny, a junior, played for the first time three weeks ago because her friends and family were playing; Emj Schoenke, a junior, also heard about it from friends on Discord.

“Conner Moore said ‘Hot people play Wordle.’ So I said, ‘I gotta play it, because I’m hot,’” Schoenke explained, laughing. “You can quote me on that.” Schoenke plays Wordle every day when she gets home from school and her younger brother pesters her about the day’s word.

Wordle is a game of strategy, so naturally, much debate surrounds the opening word. Should it be vowel- or consonant-heavy? Should players use the same word everyday or mix it up to keep things interesting? Which letters are the most common? Some players have even calculated letter frequencies in all the five-letter words in the English language, and linguists have shared their suggestions on social media.

Juliette Mandelbrot, a sophomore, is very strategic with her opening. She uses AEONS, the British spelling of “ions,” because it has so many vowels. She likes the game “because it’s not too time consuming and it’s easy to talk about with others.”

Similar to Mandelbrot, Starr, Gaffeny and Schoenke choose their first word based on common letters. Starr uses TRAIN. “R is one of the most common letters in words, and T is also pretty common,” she explained.

For about a week, Gaffeny has been using TOAD, citing its two vowels and three popular consonants as its strengths. Schoenke likes SHARE and COMIC because of the M, C, O, and I, which she says are common and therefore strong letters to start with.

On the other side of the opening word debate, some players, including author John Green, argue for changing up the first word everyday. Levi Rudolph, a junior, falls into this boat.

Rudolph likes to choose a new word everyday because it’s simply more fun. “If you do the same thing everyday, it gets boring,” he said. “It’s supposed to be a game after all.” After his first word, Rudolph often chooses a word with totally different letters to eliminate all the options for unguessed letters.

Several students play Wordle during class, including Starr. Others play in the morning or right after school like Schoenke to discuss it with their friends and family.

It may not last long, but for now, Wordle is a fun addition to many students’ days, and Wardle at least earned some money off of it. On Jan. 31, The New York Times announced its purchase of the game from Wardle, the designer, for “an undisclosed price in the low-seven figures.”

Here is Wordle, if you have not yet tried the game out for yourself.