#Relatable: The Problem with Depression Memes 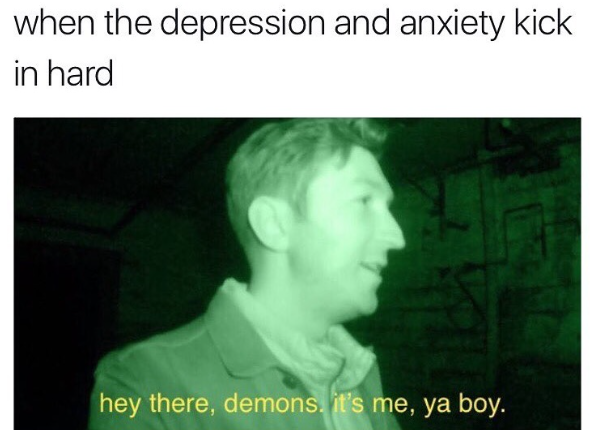 When one is diagnosed with Obsessive-Compulsive Disorder, they don’t exactly define the illness as “being addicted to aesthetically pleasing photos of perfectly arranged objects.” Unfortunately, that’s what most teens associate with the disorder. The clinical definition of OCD, according to the National Institute of Mental Health, is “a common, chronic and long-lasting disorder in which a person has uncontrollable, reoccurring thoughts (obsessions) and behaviors (compulsions) that he or she feels the urge to repeat over and over.” This clearly shows that there are many lasting misconceptions about mental illness. The stigma around mental illness is generally better than what it used to be, with everyone from famous stars to middle school students talking about their struggles, but there is still a large amount of shame surrounding these topics. One way that information is spread in our modern lives is through the Internet, but more specifically through memes or jokes. Lately, the tone of these jokes have turned to mental health issues, and that stigma is perpetuated through them. The commodification of real, difficult diseases is incredibly startling, and the culture of mental illness at Middleton High School is a fascinating facet of school life.

MHS student Sarah (whose real name is not being used as she requested to stay anonymous), described the illness as “feeling that everything you do will result in something undesirable and causes uncomfortable anxiety until you submit to your compulsions.” It’s clear that OCD is not something to joke about, and yet it and many other mental illnesses such as depression and anxiety are made out to be humorous. Any post about struggling with mental illness, whether it is in jest or not, has its comment section flooded with people saying “me” or “same.” It’s very common to stumble upon a meme page filled with posts about depression naps, drinking bleach, and jumping off of buildings. This isn’t healthy. This culture of sameness and relatability is almost too common to be true. A normal way of coping with mental illness is humor, and many rely on memes to do so. But when neurotypical people (those without mental health issues) start making and supposedly “relating” to these memes, we know that there is a problem. When someone without a mental illness starts claiming these symptoms, it creates its own type of gentrification and commodification. As a student with mental health issues, Sarah says that the popularity of depression and other issues can “foster a lot of misconceptions. I don’t have depression, but I can speak on OCD. It’s often depicted incorrectly in the media, and when it is talked about in the media, not all of the facts are there.” These mental illnesses can be glamorized and romanticized, to the point where individuals will even profit from them with cutesy “anxiety” pins and 13 Reasons Why– esque television shows. According to Sarah, “If you look up OCD on YouTube, a lot of them depict it as something that is quirky. In reality, it ruins life and makes a living harder than it normally would be. I’ve watched videos of people who have been sent to the hospital because of OCD, and it’s just not quirky.” It’s made to be so common that one can’t tell the jokes from the real cries for help.

Sarah mentioned that the issue of mental illness seems especially prevalent at Middleton: “I see it a lot. It’s an issue that a disproportionate number of students struggle with.” As mentioned before, more kids than ever are being diagnosed with a mental health problem. 6.3 million kids have an anxiety disorder, and the rate of depression in teens has jumped almost 30% since 2005 (TIME Magazine). Middleton is known for its high standards, and this is reflected in the number of students who have spoken about the anxiety and stress those standards cause. Placing an incredible amount of stress on grades and achievement, the culture at Middleton hasn’t exactly reinforced the importance of “self-care.” There have been efforts to include mindfulness and other stress-relieving activities into our daily schedules, but not many students take advantage of them.

Our generation has become desensitized to many things with the constant presence of news apps and media, and this is no different. That’s why depression memes are more than just a joke. While many students (myself included) have found these memes to be funny, we rarely sit back and think about the greater implications of them. It’s okay to share a depression meme and laugh at it, but it’s imperative to remember that mental illness is a real and painful part of people’s daily lives. We can laugh at the more difficult things in life, but we should never glamorize it to the point of making it a trend or associating it with a higher level of popularity. Stress is a normal part of life, but when it gets to the point of making countless memes and posts about killing yourself (whether humorous or not), there needs to be a change. Remember, there is always someone out there who cares about you, whether it be a friend or a teacher.

If you are feeling suicidal or in need of help, you can visit the counselors in Student Services, use the National Alliance on Mental Illness website at www.nami.org, or access the 24-hour National Suicide Prevention Lifeline at 1-800-273-8255.