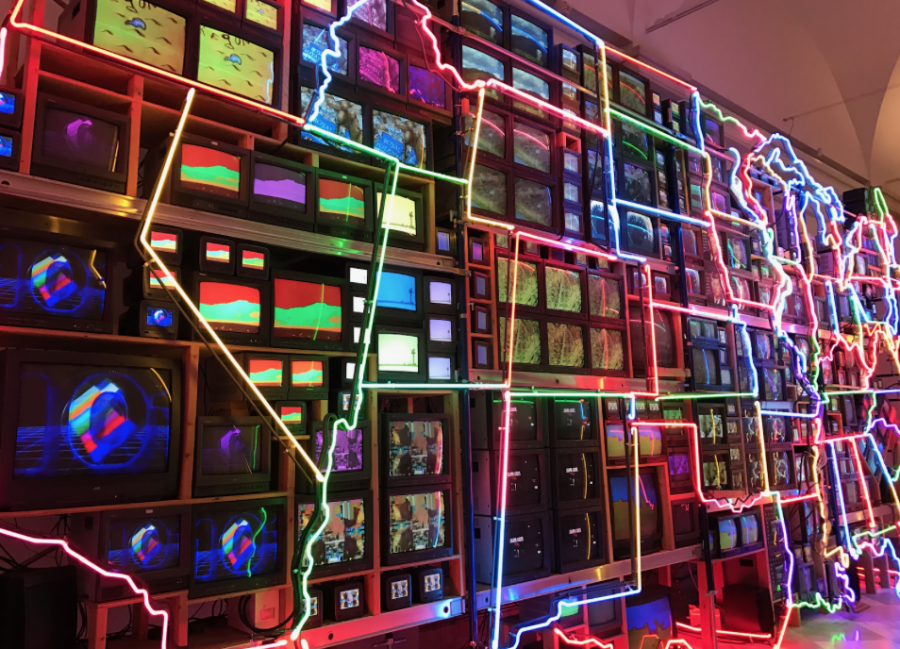 Various-sized televisions, outlined by neon lighting, create the configuration of the United States.

A heavyweight, streaming-service competition between four major media companies is about to take place. The defending-champion is undoubtedly Netflix; however, Disney, Amazon, and AT&T are strategizing to take over as the next superpower.

Since its introduction to the online streaming world in 2007, Netflix has grown 1188.672% or 12.8 billion dollars. The staggering growth of the company is leading to major companies wanting a part in this prosperous industry.

Walt Disney Co., a multinational media and entertainment conglomerate, is preparing to get in on the video streaming action.

With possibly the best content library in the world, Disney is a potential threat to Netflix’s dominance. Disney announced that the still unnamed and unpriced streaming service would launch in 2019.

In an interview with The Hollywood Reporter, Disney’s CEO, Bob Iger, explained that “It will have the entire output of the studio, animation, live action at Disney, including Pixar, Star Wars and all the Marvel films.” He also declared that the service would have about 500 movies and 7,000 episodes of TV shows.

The 95-year-old entertainment company is in the process of acquiring 21st Century Fox and is likely to include their content on the streaming service. Fox owns an extensive library of shows and movies, including Avatar, Deadpool, War for Planet of the Apes, Modern Family, The Simpsons, and Family Guy.

Disney is not expected to include R-rated movies and mature television shows on their new service, but instead place them on Hulu, in which Disney has a 60% stake.

The immense amount of content owned by Disney and the company’s unique brand puts them in a strong position to compete with Netflix.

Amazon, a fast-growing e-commerce and cloud-computing company, led by CEO Jeff Bezos, has been in the video service industry since 2006 with the introduction of Amazon Prime Video. Since then, the company has been unable to gain leverage over Netflix but is hoping it has something that can help do just that.

The Amazon-owned company, IMDb, is reportedly very close to announcing a streaming service that will offer old movies and TV shows titled Free Dive. The ad-supported service will be available to approximately 48 million Fire TV users and will be free. Amazon’s decision to use an ad-supported platform signals that the company is not only interested in the streaming industry, but also the 70 million dollar TV advertising market.

The possibility of consumers being attracted to a free streaming service creates an interesting opportunity for Amazon to target Netflix.

AT&T, a multinational telecommunications conglomerate, announced on October 10th that they would launch a — still unnamed — streaming service at the end of 2019. The service will likely center around HBO and the new WarnerMedia which was created four months ago with AT&T’s 85.4 billion dollar acquisition of Time Warner.

AT&T is not interested in replacing the current HBO streaming services, HBO Now and HBO Go, but instead adding a service that is complementary. In a statement released on October 10th, WarnerMedia CEO, John Stankey, explained, “We are committed to launching a compelling and competitive product that will serve as a complement to our existing businesses and help us to expand our reach by offering a new choice for entertainment with the WarnerMedia collection . . .”

The acquisition of Time Warner and the creation of WarnerMedia creates a fascinating case for AT&T’s hopes to become a streaming superpower. The streaming service could include shows such as Friends and Game of Thrones and movies such as the Harry Potter franchise and Wonder Woman.

Friends, a WarnerMedia property, is licensed to Netflix in a deal that will expire in a few years. Once the contract with Netflix expires, and the show is transferred to AT&T’s service, many Netflix subscribers could flock to AT&T.

Due to the likelihood of popular shows and movies being included on AT&T streaming, this service could be a potential threat to the dominance of Netflix.

Because these streaming services are not yet created, it is still unclear whether Walt Disney Co., Amazon, or AT&T will be able to compete with Netflix. However, The Streaming Wars will likely be a lengthy, complex, and exciting competition that could potentially end in one company reigning supreme, or multiple services being complementary to one another.

Which service(s) you subscribe to will depend on your movie and show preferences and how much you are willing to pay; this could lead you to subscribe to one, multiple, or all of the streaming services.