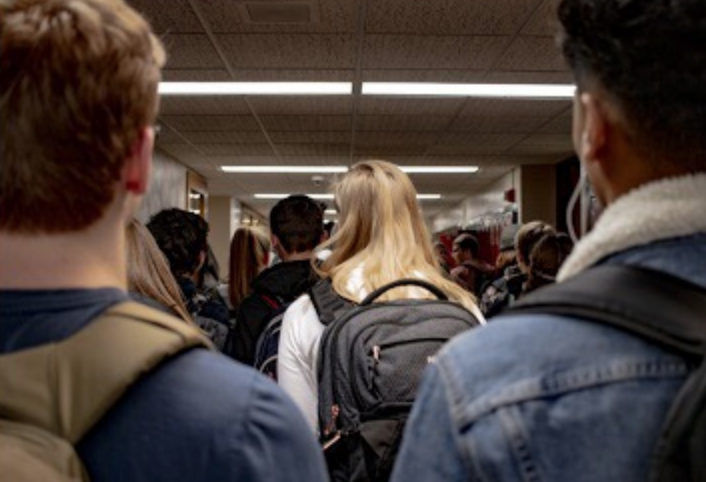 Students experience sexual harassment within the halls of the school building, from hallways to classrooms.

If you asked an MHS student whether they have ever seen sexual harassment at school, they would probably say yes.

A 2011 study found that “sexual harassment is part of everyday life in middle and high schools. Nearly half (48 percent) of the students surveyed experienced some form of sexual harassment in the 2010–11 school year.”

The study, conducted by the American Association of University Women (AAUW), drew data from a representative sample of 1,965 students in grades 7-12. “Witnessing sexual harassment at school was also common,” the survey found. “One-third of girls (33 percent) and about one-quarter (24 percent) of boys said that they observed sexual harassment at their school in the 2010–11 school year.”

In our last article, we mentioned that rape culture is not just words: it also manifests in physical actions. This includes the sexual harassment that MHS students face from peers on school grounds.

One common theme in the stories shared by students so far is that all the sexual harassers have been boys. Statistics show that boys perpetrate sexual harassment more frequently than other genders. In an AAUW study, “Boys were more likely than girls to say they sexually harassed other students (18 percent versus 14 percent).”

This cycle partially has roots in the language of rape culture, namely, in the normalization of sexual violence and the use of sexual violence as humor. “Many of the students who admitted to sexually harassing others didn’t think of it as a big deal (44 percent), and many were trying to be funny (39 percent),” the survey said. “. . . These findings suggest that prevention efforts need to address when humor crosses the line and becomes sexual harassment.”

Bianca’s experiences at school have matched this definition. “I’ve had a couple of situations where guys have, like, smacked my ass,” she said. “But besides that, sometimes if I wear low-cut shirts – I remember last year, this one guy used to try to throw things into my shirt. And I was just like, cool, so now I know that you’re staring at my boobs and then you’re making a game out of it.”

Lindsay also had an experience where a boy harassed girls because of the clothes they were wearing. During her sophomore year, when the U.S. Government & Politics class hosted a day-long event in the PAC, one boy went around “upskirting” girls who were wearing tight-fitting dresses and skirts.

“What he was doing is he was taking his phone . . . and he was putting it up girls’ skirts. Cause a lot of girls kind of wear those . . . bodycon dresses,” Lindsay explained. “[The dresses make] it really easy for somebody to just easily take a photo.”

For Lindsay, responses to the clothing she wears have made her feel uncomfortable since she was in middle school. “I’d wear short shorts when I was in middle school,” she said. “And I always felt like I was in trouble, cause I was breaking the dress code violation . . . There’s nothing wrong [with having a body], but so many of us felt like we were doing something wrong. Just by wearing a certain article of clothing.”

Another form of sexual harassment at MHS is nude photos. Nude photos are discussed at school much more openly than other forms of sexual harassment, both among students and the administration. At the beginning of the school year, the administration held mandatory class meetings in the PAC for each grade level. The topics of discussion ranged from vaping to the school dress code to nude photographs.

To Bianca, who attended the senior class meeting, the message the administration sent about nude photos was very problematic. “Teenagers are exploring their bodies, and that’s something that people do, but the fact that people are sending these sexts out [to other people is] the problem,” she said. “People are always going to send nude pictures of themselves. No matter if it was paintings back in the Victorian era or now. There’s always going to be nudes.”

Bianca disliked how the administration said that it was the fault of the person who took and sent a nude photo in the first place. “It’s not [your fault]. You’re sending it to someone who you trust enough to send a naked picture, and they just betrayed that,” she said. Bianca believes that the school needs to reprimand those who distribute the nude photos instead of those who send  nude photos in the first place.

The administration did hit the nail on the head, however, when they talked about how often nude photos are used to harass girls. The New York Times reported that in a nationally representative survey of 1,000 students aged 10 to 19, “81 percent of girls 14 to 19 said they had at least one friend who had been asked by a boy for a sexy or naked photo.”

Skyler was sexually harassed last year by a Middleton student who kept pressuring her to send him nude photos. He told her, “If you don’t send me nudes, I’m going to tell everyone you did anyways, and everyone’s going to think you’re a ho, so obviously you should [send me nudes].”

She has heard of the same thing happening to many girls. “[I hear] the stories of so many people being like, ‘Oh, so-and-so asked me for nudes last night. And they called me a ho or a bitch or something for not sending them,’” Skyler said. “Or the, ‘Oh, if you don’t send them, I’m going to tell everyone you did anyways, so it doesn’t really matter.’ Or the comparisons between people,  like, ‘Oh, this person sent me nudes, so you have to, too.’”

Comparing girls solely for their bodies can cause a multitude of issues. During one of Lindsay’s years at MHS, some boys made a bracket with all of the girls in the grade on it. The boys debated the physical characteristics of each girl, trying to narrow it down to the “hottest girl in the grade.”

One day, Lindsay discussed this issue in her social issues seminar class. “It was kind of a beautiful thing because we all came together, and it was like, there were a lot of women in there who were on [the bracket], and we were all like, yeah no. Like, I think y’all are beautiful, I think like we have value beyond what someone did here,” Lindsay said. “And dude, it was like pure, it was wonderful, and it was like [we] took that power from whatever moron put that thing together . . . and it was great.”

While these moments of support are crucial to deconstructing rape culture, survivors of sexual harassment and assault often receive backlash and criticism when they share their stories.

In the next article, we’ll hear from students who received backlash from their peers after making the decision to come forward and speak out about their experiences with sexual assault.