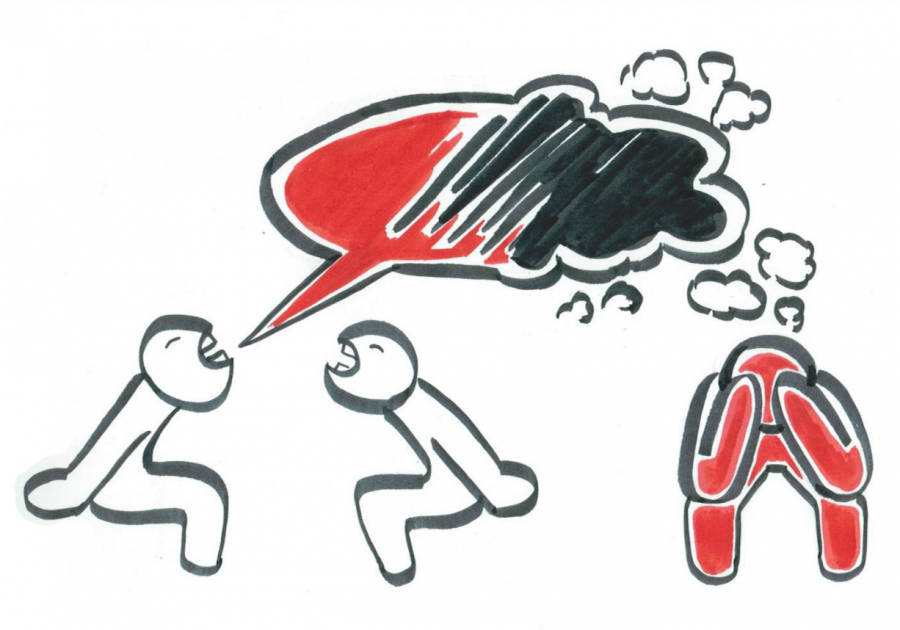 An illustration by MHS senior Jazmyn Babler depicts the spread of toxic messages.

“[We use] the word rape out of context. So not just as what it’s defined legally. Like, when we’re playing a video game, when someone defeats you, kills you, and stuff, you would say, ‘Oh, that guy got raped.’”

Alan just described a rape joke: a comment that ridicules the act of sexual assault or rape in an effort to be humorous. In conversations that he and his friends have over their headsets when they play video games together, such jokes are commonplace.

“I don’t think we’ve ever offended anyone with it because the jokes are all made in private,” he said. “And whenever we do say something like that – cause there have been incidences where we do like let it slip and we say something bad like that in public – we’re all just like, ‘Oh, well that wasn’t cool.’”

Despite feeling that these jokes are considered offensive and inappropriate by other people, Alan and his friends still make the jokes on their private calls. “None of us really care because we know no one’s being directly affected by it,” Alan said. The consensus among the group, as far as Alan can tell, is that rape culture is a complex issue and a touchy subject, but not one that they as boys have to worry about.

Rape jokes and other sexual comments circulate from student to student at MHS. These comments frequently use violent and derogatory terms, creating an environment filled with unhealthy messages about sex and sexual violence. This environment is rape culture.

Rape culture exists in high schools across the country. A recent New York Times article analyzed the results of a nationally representative poll of 1,000 children and adolescents 10 to 19 years old conducted by the research and polling firm PerryUndem. The survey found that “About half [of girls] said they hear boys making sexual comments or jokes about girls daily, including a quarter of girls 10 to 13.”

These sexual comments and jokes are extremely influential in shaping the attitudes of teenagers. Psychologists have long substantiated that peers have a much larger influence on adolescent development than parents.

Judith Rich Harris, a renowned American psychologist, said in a Telegraph article, “Though relationships with parents greatly affect the day-to-day happiness of children . . . in the long run, it is what happens to them outside the parental home that makes children turn out the way they do.”

The Impact of Being Viewed as a Sexual Object

The study found that wearing swimsuits – which the researchers correlated with self-objectification – led women to feel increased body shame. This, in turn, predicted restrained eating, such as eating fewer cookies or only eating a part of one. In addition, women wearing swimsuits performed worse on the math tests. Men did not experience similar differences when asked to wear a swimsuit or a sweatshirt.

Some students are aware of this effect operating around them. Bianca believes that there is a lot of pressure in high school to have the same beliefs as your friends. “I feel like we don’t allow for a growth of our own opinions and instead we stifle them,” she said. “. . . I feel like we all try to kind of fit into this one mold of a person, but we’re not all like that.”

Toby was waiting for the bell to ring in a shop class sophomore year when two boys started talking next to him. “One of them was talking about his girlfriend, and he goes like, ‘Oh yeah, no, if she doesn’t suck my dick in the next, like, week, I’m just going to break up with her,’” he said.

Toby had heard comments like this before. “There’d be a lot of guys who’d date a girl just to do sexual stuff with them and break up with them,” he explained.

Bianca has also heard similar comments from male students. “I’ll hear stuff about how this guy got laid by this girl, and he was like, ‘Yeah, it was alright, I guess,’” she said. “And he’ll use her name and be talking about her, being like, ‘Yeah, I guess she was alright, but her ass was too small, and her boobs were not proportionate.’”

Bianca also hears toxic messages from the girls around her. “I know I’ve had friends that’ve been called sluts. I’ve been called a slut. And it’s just like, what even is a slut?” she said.

Comments like this explain another finding from the PerryUndem survey; about three-quarters of girls 14 to 19 said “they felt judged as a sexual object or unsafe as a girl. By far, they said society considered physical attractiveness to be the most important female trait — a view that adult women share, surveys have found.”

This sexual objectification creates an unhealthy environment for young girls that is further complicated when casual conversation about sex blurs the definition of consent.

“One big thing about rape culture is I always hear the jokes that are like, ‘No means yes,’” Skyler said.  The joke is a derogatory mock-up of the phrase “no means no,” which is commonly used by sexual harassment and assault prevention advocates.

“I have heard people that say [‘no means yes’] and then someone else, you can see they have that lightbulb moment, like, ‘Oh. Is that actually true?’” Skyler said. She thinks that rape jokes are extremely disrespectful to people who have experienced sexual assault. “If you’ve had that happen to you, and then someone’s making a joke about it, to you it’s going to feel like, ‘Oh, so it was my fault,” she said.

The idea of consent also becomes blurry when people argue that women cause rape culture by dressing or acting provocatively. Another MHS student, Stella, recently discussed this topic over Snapchat with a boy she knows.  “A kid that does not go to this school posted that rape culture doesn’t exist and he just wants to go to school and not have to stare at some girl’s tits, is his exact words,” Stella said. When she responded and told the boy that rape culture does exist, he argued back by saying that “we’re just in a time where people like to victimize others.” That frustrated Stella.

“It’s not just about victimizing women,” she said. “Rape culture affects men just as much because . . . saying that a boy can’t control himself when a girl is wearing a lower-cut top or something is offensive. That’s gross, and we should be teaching kids about consent and to respect a woman just like you would any other person.”

Rape jokes and other sexual comments made at MHS normalize sexual violence and the dehumanization of women. This is a large part of rape culture. But rape culture is not just the things people say. It also encompasses people’s actions, including the sexual harassment and assault they perpetrate.

In our next article, we will share stories from MHS students who have experienced sexual harassment inside the halls of the school and beyond.