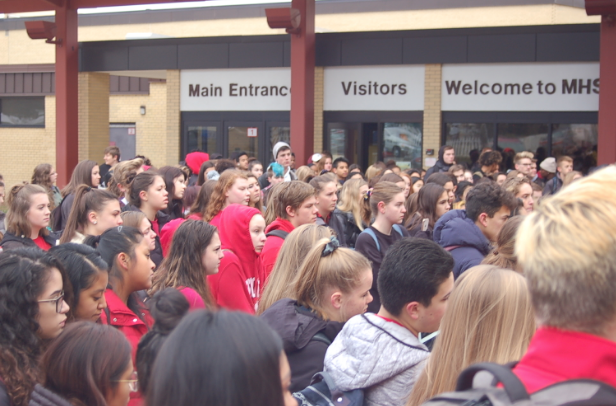 A crowd that grew to over 180 students gathers in front of the school’s main entrance on November 19 to listen to their peers speak out against sexual harassment and assault at MHS.

Students Organize in Response to Sexual Harassment and Assault at MHS

“The girls at Middleton have reported people for harassment and assault, but not enough has been done,” Grace Madigan declared over a crowd of 180 students huddled together outside of Middleton High School’s front entrance in frigid 25-degree weather.

The November 19 protest, organized by Porsha Hanifl, an MHS senior, and Ozzy Benitez, a junior and former MHS student, was a response to the stories of sexual harassment shared on social media by over one hundred MHS girls the weekend before. Several student speakers, along with Madigan and Hanifl, shared their own experiences with sexual harassment and their continued witnessing of it at Middleton High School.

Many students showed up to the protest in support, including Carter Brutosky, a junior and co-leader of the Sexual Harassment and Assault Prevention and Education (SHAPE) club at MHS. When asked why he decided to attend the rally, Brutosky responded, “Having people talking about sexual harassment and assault and how it really does happen to people you know is a good thing,” and that as a leader of a club intent on the education of his fellow students in sexual harassment, he added, “I hope it starts conversations; that’s my goal.”

SHAPE club was started towards the end of the last school year by Brutosky and fellow junior Katie Joslyn as a way to improve the issues of sexual assault and harassment they saw in the school. Since its founding, the club has presented two “Embrace Your Voice” weeks. Each day students gathered in the PAC during advisory and watched presentations from experts in the field of sexual violence prevention and education. Informative skits were also written and performed by student members of the club.

No matter how informative students may find these presentations shown by their peers, some want the administration itself to do more to combat sexual assault and harassment at Middleton. Zach Morris, a senior and attendee of the November 19 protest, told The Cardinal Chronicle that he believed, “With the presentations in the PAC, I feel like if [the administration] went up there, or if they said something about how they feel about it, I feel like it’d have a lot more of an impact . . . a lot of the times students don’t really take each other seriously when they go up and give a speech so if they showed more of like, ‘we’re looking into it, we care, it’s a priority,’ then I feel like that could be a real step because I think a lot of us feel underappreciated or kind of looked over.”

Having administration take a more active stand against sexual assault and harassment in the high school is a common theme among many of the student protesters’ messages. As well as organizing the speakers for the rally outside the school’s main front doors, Hanifl collected the stories of sexual harassment shared by MHS students online, bound them in a book, and walked into Student Services to present them to the administration. When asked why she chose to share the stories this way, Hanifl responded, “We just want admin to kind of take more leadership when it comes to girls and guys coming up to them and telling them about the things that have happened to them instead of, I guess, ignoring their cases.”

Gallery|6 Photos
Annie Warriner
Many students wear red to the protest as a sign of solidarity with sexual assault survivors.

Several students are looking towards the future and have ideas about continued activism against sexual assault and harassment at MHS. Max Prestigiacomo, an MHS senior, mentioned the need for student bodies that advocate for schoolwide issues because the current student council isn’t enough. Madigan, the current student council president, agreed, saying, “Most of our responsibility has to do with dances and decorations and holidays . . . It’s also hard with all the things that [student council does] taking up so much time that then all the important stuff kind of falls off of our plates.”

An alternative to student council mentioned by Prestigiacomo is a reintroduction of the Senate, a former body comprised of elected high school students, faculty, teachers, and parents, able to influence decisions impacting MHS. The Senate was ended several years ago, but Prestigiacomo has plans to reestablish a similar body which would allow for more student agency. The new institution would have “real power, a real influence, and actually incorporate student voice.” While the group is now only in the planning stages, Prestigiacomo said, “I want it to be pulled together before I leave. I’ve already met with school board members, and so we’re gonna submit the proposal for the student member of the board this month, and we’ll get that in motion, and hopefully, we’ll get an election for it, maybe by the end of this school year.”

Whatever the results of these actions, Middleton High School students are committed to continue advocating for an end to sexual harassment and assault at MHS. After organizing the protest on the 19th, Hanifl feels confident in her fellow student’s drive for justice, “There are a lot of other students who I feel like can also take upon their leadership role and do some of the same things to help keep it going too.”